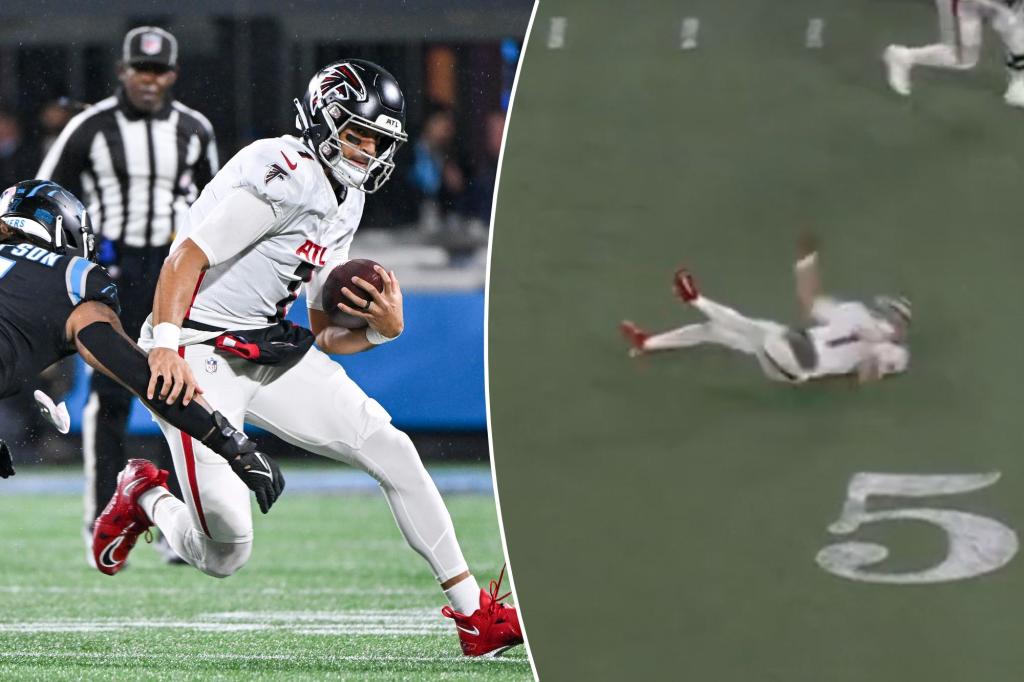 On a windy and rainy night in North Carolina, Falcons QB Marcus Mariota engineered one of the worst-quarterbacked games in the NFL thus far in the 2022 season.

The 2015 No. 2-overall pick was a mess on “Thursday Night Football” during Atlanta’s game against the Carolina Panthers, completing 19 of 30 passes for 186 yards, two touchdowns and an interception for a 89 passer rating. Numbers that actually look pretty solid on the surface, but are not representative for how Mariota played for a good chunk of the game.

His most viral lowlight from the night occurred in the fourth quarter, when he nearly threw what could have been the most comical interception in NFL history. As Mariota was getting tackled while running behind the line of scrimmage, he did a somersault and chucked the ball into the air as he was going to the ground. There was no receiver in the area, but the Panthers’ Myles Hartsfield was, and ran the interception back for a touchdown.

Luckily for the Falcons, Mariota was ruled down by contact before he threw the ball – so it was just a sack.

Mariota threw a number of balls across his body into the middle of the field that could have been intercepted. In the first quarter on 3rd-and-19, he rolled all the way right to the sideline, then heaved the ball back into the middle of the field in Drake London’s direction – and with two Carolina defenders in front of him. Safety Xavier Woods had a golden chance for an interception but the ball bounced off his hands in the slick conditions.

The former Titans QB airmailed stud tight end Kyle Pitts on multiple occasions, including on a deep throw where the ball sailed out of bounds. On another third down, as he was scrambling to keep the play alive, he ran out of bounds instead of throwing the ball away, leading to a five-yard loss and pushing them out of long field goal range. Atlanta had to punt from the 42-yard line instead.

He did throw two touchdown passes, one in garbage time, and the weather certainly played a part in his struggles (though it eased throughout the night). Falcons head coach Arthur Smith still was clearly unimpressed, as he refused to commit to a starting quarterback going forward.

“I know those are popular narratives, those are the easy questions to ask,” Smith told reporters after the game. “But as a whole football team, we’ve got to do a better job, starting with myself. So, we look every week to make sure we’ve got the right guys in the right spots.”

The other option is rookie Desmond Ridder, whom Atlanta selected in the third round of the 2022 NFL Draft. The Cincinnati product has been praised for his processing ability and feel for the game, though his accuracy and arm strength are questionable — issues that plague Mariota as well.

The Falcons are still only a half game back of the NFC South lead, and will be tied with the Buccaneers if they lose to the Seahawks in Munich. Maybe Smith doesn’t trust the rookie in what is still a playoff chase – but could the passing game be any worse than it was Thursday night?