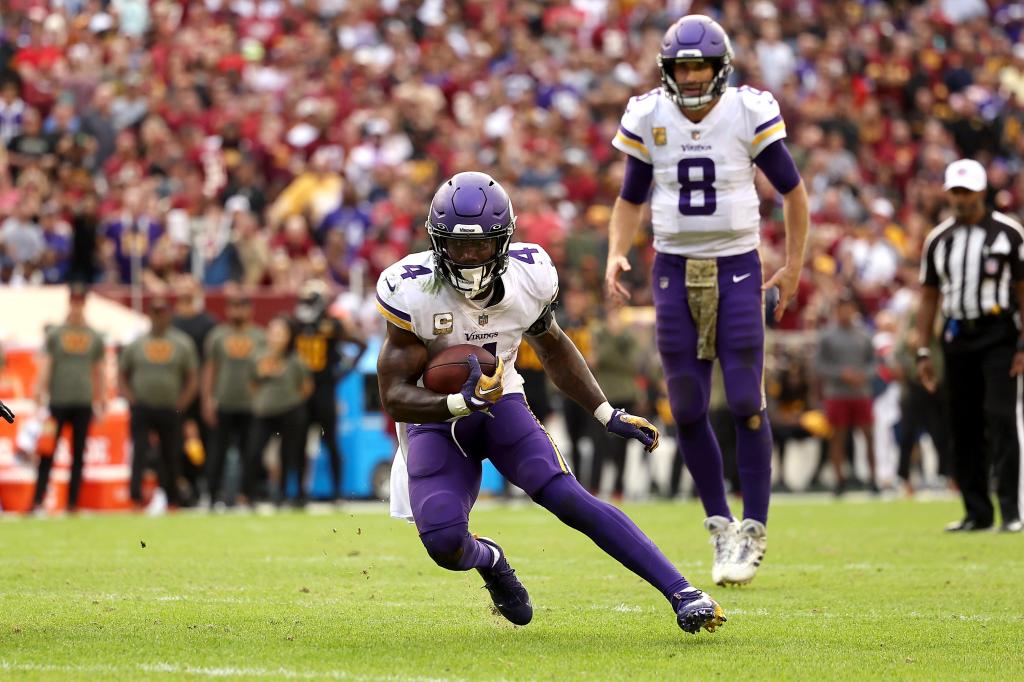 Our NFL betting writer brings you his best Vikings vs. Bills predictions and picks for their NFL Week 10 showdown, which is live Sunday on FOX at 1 p.m. ET.

The Minnesota Vikings carry a six-game winning streak into Sunday’s clash against the host Buffalo Bills in Orchard Park, N.Y. The Bills (6-2) didn’t just see their string of four straight victories come to a halt in last week’s 20-17 setback to the New York Jets, they also saw MVP candidate Josh Allen sustain an injury to the ulnar collateral ligament in his right elbow.

Vikings vs. Bills picks and analysis

First things first: The Bills opened as 9.5-point favorites before dropping to 3.5 as of Thursday morning, with Allen’s injury status the primary reason for the seismic shift. Former Viking Case Keenum would be at the controls of Buffalo’s top-ranked offense should Allen sit out Sunday’s contest.

Sunday’s game features a pair of the top wide receivers in the game who indirectly were traded for one another back in 2020 — and that’s before Jefferson stepped foot in the league. Minnesota sent Stefon Diggs and a seventh-round pick in the 2020 NFL Draft to Buffalo for a first-round selection in that same draft — which later became Jefferson — fifth and sixth-round picks in 2020 and a fourth-round selection in 2021.

Sunday’s game also features the Cook brothers in opposing backfields. Minnesota’s Dalvin Cook will face a Buffalo rush defense that has been rather generous over the last three games, while rookie James Cook will spell Devin Singletary and encounter the Vikings’ 10th-ranked rush defense (111.3).

While Keenum is more than a capable backup, the potential absence of Allen is a significant blow to how Buffalo runs its offense — and how opposing defenses play their coverages. Retreating linebackers won’t have to be on the lookout for a running quarterback — well, one that is roughly equal to their size.

Keenum, 34, has completed just 2 of 7 passes for eight yards in mop-up duty this season. He has played in just 11 games over the last two-plus campaigns and likely is far removed from the quarterback that established career-high totals in completion percentage (67.6) and touchdowns (22) while leading Minnesota to the NFC Championship Game during the 2017 season.

Allen essentially is the Bills’ ground attack, as he leads the club in yards (392) and rushing touchdowns (four). While Singletary is rushing for 4.4 yards per carry, and Cook has added 5.3 per tote in a lesser role, Buffalo will be severely shorthanded should Allen be reduced to the role of a spectator. Minnesota can win this game outright.

While Buffalo has injury issues to address, Minnesota likely is looking to make a statement. The knock on the Vikings is a perceived soft schedule, with a 24-7 loss at Philadelphia on Sept. 19 and a 24-16 win in Miami on Oct. 16 serving as their lone two games against teams above .500 at the moment.

Dalvin Cook will look to atone for being held to just 47 rushing yards last week. He did reel in a receiving touchdown in Minnesota’s 20-17 victory over the Washington Commanders, marking his fifth trip to the end zone in the last four games.

Betting on the NFL?

Let’s face it: With all due respect to Diggs (NFL high-tying seven receiving touchdowns), the Bills’ offense centers around Josh Allen. Heck, their Super Bowl aspirations do too.

With that in mind, it likely isn’t wise for Buffalo to trot out an injured Allen with half the season remaining.

While Keenum provides veteran leadership, it likely will take a bit for the offense to get untracked on Sunday.

Odds courtesy of Caesars Sportsbook, accurate at the time of publishing and subject to change.