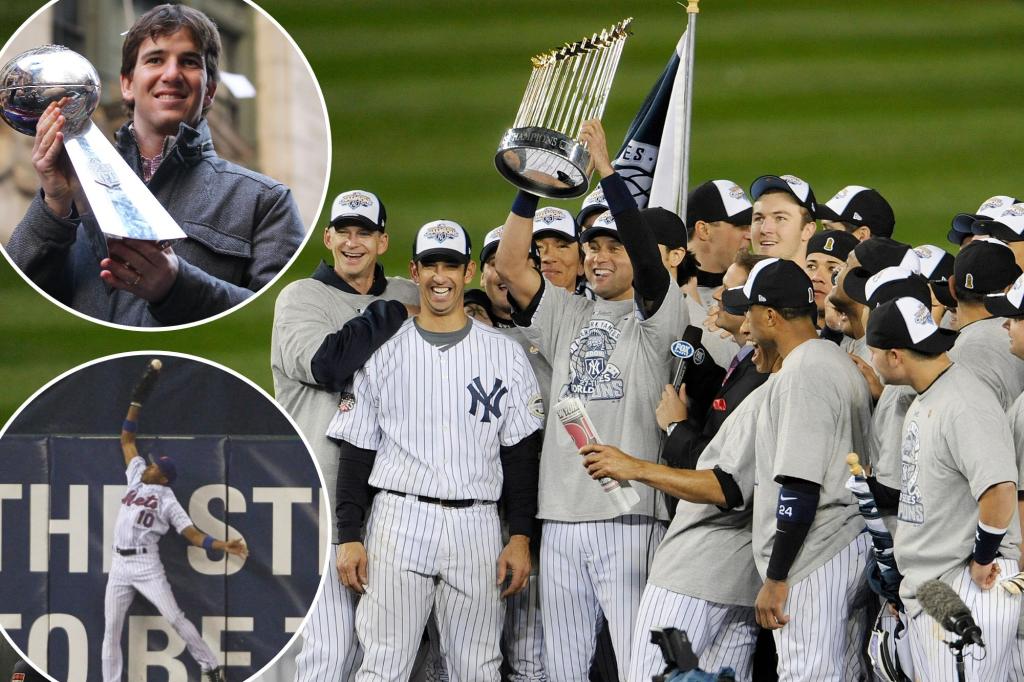 This week I celebrated my 20th anniversary here at The Post. I’ve told this story often and it’s true: My father used to bring the old afternoon Post home from work on the LIRR every day, so from the time I was 7, there was but one job I ever wanted, and beginning on Nov. 10, 2002, in a press box at the old Metrodome, I actually, miraculously, began it.

It’s been quite a run, and I thank you for joining me every step of the way. To celebrate, I can think of no better vessel to remember the last two decades than borrowing a favorite Billy Joel melody (plus, it’s a good warm-up for my Christmas carols, which’ll be here before you know it!).

“I Didn’t Start the Fire”

Knicks are in the tank

Favre’s a Jet, Buck’s a Met

Tiger in the parking lot

But I loved to write it

Bet the Derby, hang with Serby

Coughlin in the chill

Both Patrick and Pat Mahomes

CC on the hill

Devils won the Cup with Marty

Giants went down south to party

Last day at Shea, quite morose

But hell yeah, I’ll write it

(Lock the door after you’ve gone)

McAdoo and Shurmur too

Or the angst returning

Or the dues-paid earning

But damn right, I’ll write it

Serena blows the field away

And to Tug his ace reliever

Yankees beat the Phils in six

Knicks could use a draft-day fix

When he texts run to Green Bay!

But it’s fun to write it

I’m pretty sure that any fan of “Breaking Bad” can agree that our favorite college hoops player to watch this year will be Boston U.’s Walter Whyte, who dropped 27 Monday in the Terriers’ season-opening, 72-63 win over rival Northeastern.

Keith Hernandez is not on the Contemporary Baseball Era ballot for the Hall of Fame and Rafael Palmeiro is? That’s got to be a joke, right?

Still, here’s hoping Donnie Baseball gets the votes this time around.

Whack Back at Vac

Joe Palumbo: Happy that my Devils weren’t included in your list of teams hated by their own fans, thanks. And unless you count the Red Bulls and NYCFC, the Devils were the only team not on the list.

Vac: And the way they’re playing this year they are in no hurry to join that list!

Dennis Daly: I love the Philly Big Five and the Palestra. I am so jealous. If only Rose Hill was double in size: St. John’s, Fordham, Manhattan, Iona and Columbia/Hofstra.

Vac: I still say a rotating cast of those six plus a St. Francis and Stony Brook would make a terrific four-team kick-off tournament every year that could alternate between the Garden and UBS Arena. Name it after the late, great AP hoops maven Jim O’Connell.

@knishboy: If 81-year-old Pete Rose ever gets into the Hall of Fame, it will be one hell of a weekend in Cooperstown, and I’ll be there for the overdue party … which of course will be co-sponsored by DraftKings and FanDuel.

@MikeVacc: I’ll be sitting right next to you.

Alex Burton: According to Joel Sherman, Michael Conforto’s agent, Scott Boras, claims Conforto’s recovery from shoulder surgery is going well and that he is now “throwing up to 120 feet.” Linda Blair would be very proud.

Vac: Well, can now cross “Exorcist” reference in “Whack Back at Vac” off my professional bucket list.