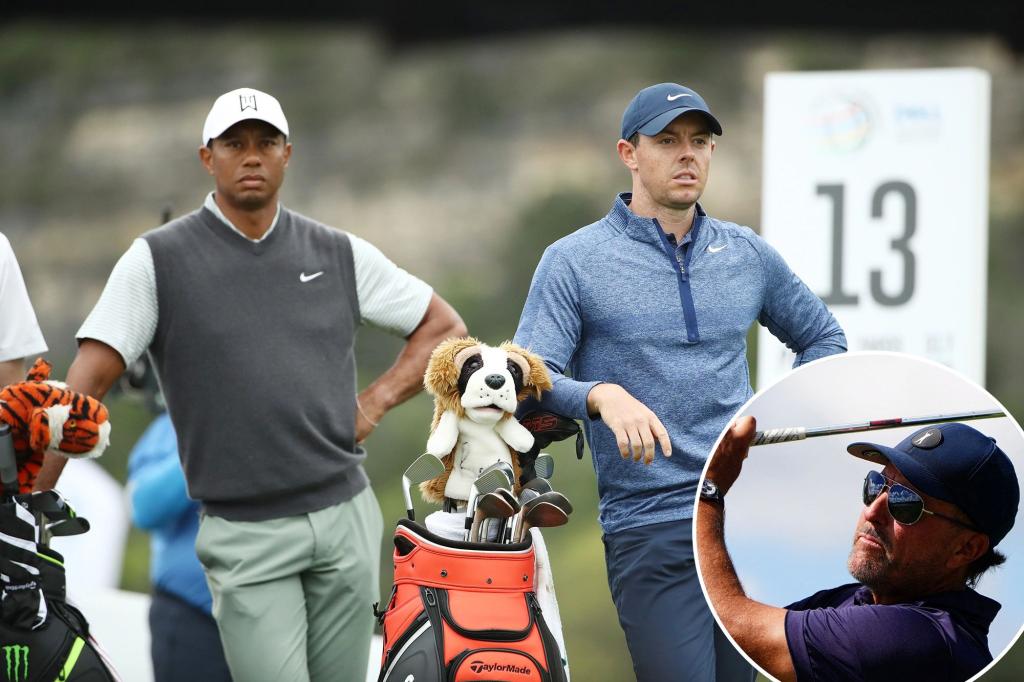 Golf’s civil war has a break in the fighting, but it’s far from over.

LIV Golf completed its first season two weeks ago at Trump National Doral outside Miami. Success is in the eye of the beholder, but in short order the new bully on the block managed to lure a handful of big names, including Phil Mickelson, world No. 3 and reigning British Open and Players champ Cam Smith and major champions Brooks Koepka, Bryson DeChambeau and Dustin Johnson, among others, while also pulling off eight tournaments and getting more publicity than it could have dreamed.

All of those things were made monumentally easier by the endless resources of Saudi Arabia’s sovereign wealth fund, of course, but it’s clear that LIV isn’t going away anytime soon. Act II of the controversial circuit will resume in February, with 14 tournaments slated through early September, up from eight this year. At least half of those will be in the U.S. — including a handful on Donald Trump-owned courses after Trump’s Bedminster course was dumped by the 2021 PGA Championship over the Jan. 6 attack on the Capitol (and before that his Doral course by the PGA Tour in 2016). The rest will be spread around the globe, though anything less than at least half would seem disingenuous to LIV’s claims of being a world tour. A schedule announcement is expected within the next few weeks.

The PGA Tour, meanwhile, will wrap up the fall portion of its 2022-23 season next week at Sea Island Golf Club in St. Simons Island, Ga., where a policy board meeting on a number of topics – including LIV – will also take place. Then they’ll resume the season the first week of January and follow with a schedule that includes 13 elevated tournaments, which feature purses of at least $20 million. It’s just one of a few ways the tour will funnel more money to its top players, who as part of the increase are guaranteed to compete in the same tournaments together. The recent announcement of a joint venture by Tiger Woods and Rory McIlroy that includes “high-tech” golf on select Monday nights is another example of ancillary ways the tour will look to line the pockets of its stars. And for the first time, the top college senior will be issued a PGA Tour card immediately after NCAAs, with top underclassmen also provided points that could lead to a card as the tour looks for ways to prevent the top amateurs from being plucked by LIV.

What does all of it mean, and where do things go from there?

First, the tour’s stance on those who bolt for LIV isn’t changing. Though McIlroy said recently it’s time for the two sides to “find a compromise,” players who leave for LIV will continue to be banned from playing in tour events. Whether players from the DP World Tour (formerly European Tour) who have gone to LIV will be banned from that circuit will be adjudicated in February.

While the PGA Tour declined to comment for this story, citing LIV’s ongoing antitrust lawsuit against it, sources inside the building say there’s little chance of LIV and the tour ever working together because the view is that LIV isn’t looking to be additive to the tour, as its commissioner Greg Norman recently claimed he’s open to doing, but rather the tour would “cease to exist as we know it.” They also say that Norman’s attempts to meet with the tour are overstated, with the Hall of Famer having only reached out and left a voicemail shortly before LIV announced its plans.

The R&A, which oversees the Open Championship, recently said in a Golf Digest interview that it won’t ban LIV players from competing in 2023, though it could make changes to its qualifications, which will be announced early next year. The U.S. Open could follow suit, while the Masters continues to be mum on the topic — though sources indicate it’s unlikely they’d ban past champions. The PGA of America, which runs the PGA Championship and the U.S. side of the Ryder Cup, has hinted that LIV golfers won’t be eligible for next year’s Ryder Cup in Italy, but they’ve also yet to take an official position on next May’s PGA Championship at Oak Hill in Rochester. It should also be noted that PGA of America CEO Seth Waugh has close ties to Tour commissioner Jay Monahan.

“It makes more sense for [the majors] to stay above the fray [when it comes to LIV] than to take a position,” one longtime and high-powered figure in golf told The Post. “The world ranking issue will resolve this over time. It’s an unnecessary risk to draw a line in the sand.

“There are reasons to do it on moral grounds [for being financed by the Saudi Arabian government and calls of sports washing], but then you have to be squeaky clean at every level. That’s just impossible to do comprehensively, so it’s better not to enter the conversation.”

LIV’s connection to Saudi Arabia remains a notable issue given the country’s abhorrent human rights record. Even its biggest star, Phil Mickelson, admitted in a message to The Post before he left the tour for LIV that the circuit is being used to sports wash the country’s image. There were also protests this summer from multiple September 11th groups excoriating LIV for its Saudi ties following the declassification of documents that link the country to the 9/11 attacks.

But that’s not slowing anything down. LIV laid out roughly $785 million this year, according to a Sports Illustrated report, and is expected to shell out close to $1 billion all in for 2023.

“I truly believe what we’re doing is making a positive impact for the game,” LIV chief events officer Ron Cross — a former longtime PGA Tour exec who also had a stint at Augusta National — told The Post. “The energy we’re bringing to events, the team format, the players and level of competition that they’re performing, all of those factors come into play.”

That impact is debatable. Without a TV deal this year, viewership online averaged in the tens of thousands on YouTube in the States. Tickets to the tournaments often went for a few bucks, or even less — free — with one fan at the Bedminster tournament quipping that he “overpaid” for the ticket he bought for a dollar. But what is clear is that the organization is hitching its wagon to the team and franchise format with the hope of attracting more sponsors.

It’s how other sports operate, Cross noted, and it’s something that works for the Ryder Cup (and to a lesser extent, the Presidents Cup). But those events take place only biennially and they have built-in national pride and history. It remains to be seen whether it can work for a league 14 times a year with players vying for nothing more than enormous sums of guaranteed money and the champagne bottle-popping that goes along with the 54-hole, no-cut tournaments.

“The part that will be most interesting in years ahead is, what people get excited about in baseball and football offseason are the trades and free agency and the drama of is so-and-so going to stay with this team, or are they going to go off and play for their rival.”

That element of LIV is fundamentally different than what the sport has always been. The golf is still essentially the same, but it’s the stuff around that is not.

“With only 48 guys [in the league] and having teammates, it feels like we’re in this together,” one LIV player told The Post. That same player however also expressed concern that golf could go the way of boxing and suffer irreparable damage given the current divide.

Much will depend on whether LIV is awarded world ranking points for its events, which is a significant pathway to the four majors. Sources from LIV say they expect the issue to be resolved by February; others are less optimistic.

For one, the process is not speedy under the best of circumstances. For another, LIV doesn’t meet all the criteria for garnering points, though relegation and promotion, which will be part of the 2023 season, along with its alignment with the MENA Tour and Asia International Series, among other changes, should take care of that. Even then, the seven-person world ranking board includes the heads of the PGA Tour and the DP World Tour.

“Even if they get points, will enough be awarded to have an impact?” one longtime agent reasoned.

Yet, more players will be ditching the PGA Tour for LIV in 2023. Who exactly remains to be seen — Xander Schauffele and Rickie Fowler were both rumored, but sources close to both confirmed to The Post that neither has plans to join LIV. Meanwhile, Greg Norman, who declined to be interviewed for this story through a spokesperson, previously said that he’s targeting seven more players for next year. Indications are, however, that none of them will be among the tour’s current stars.

“At this point, the [stars] who wanted to go have left,” one player told The Post. “Those on the fence will always be on the fence.”

The other significant element of LIV revolves around a television deal. As Golfweek first reported in late September, the organization was closing in on purchasing air time for its events on Fox Sports 1. Sources have also confirmed to The Post that LIV will end up on the network in some capacity.

Lastly, there’s the antitrust lawsuit that LIV and a few of its players have filed against the tour. The tour also filed a countersuit in September, accusing LIV of interfering with its contracts with players. And, the Department of Justice has an ongoing investigation into the tour’s alleged monopolistic actions, allegations that the tour has denied.

None of those matters figure to reach a conclusion anytime soon — the antitrust lawsuit has a tentative date for summary judgment for July 23, 2023, when the tour will try to get the case dismissed, and a trial date slated for January of 2024.

“I see things operating very similarly to how they do now for the foreseeable future,” one high-ranking source told The Post. “I’m not surprised [LIV] pulled off what they did. This was inevitable. It’s not a surprise when you have connectivity to the right people with unlimited resources. It would be a mistake to underestimate sophisticated people with unlimited resources.”

What does that mean for golf? Time will tell.

“The game will survive,” another veteran agent whose stable includes multiple major champions and multiple LIV players said. “It’s one of the greatest games of all time. This is just business.”

Or as Sun Tzu and Gordon Gekko might say, the art of war.