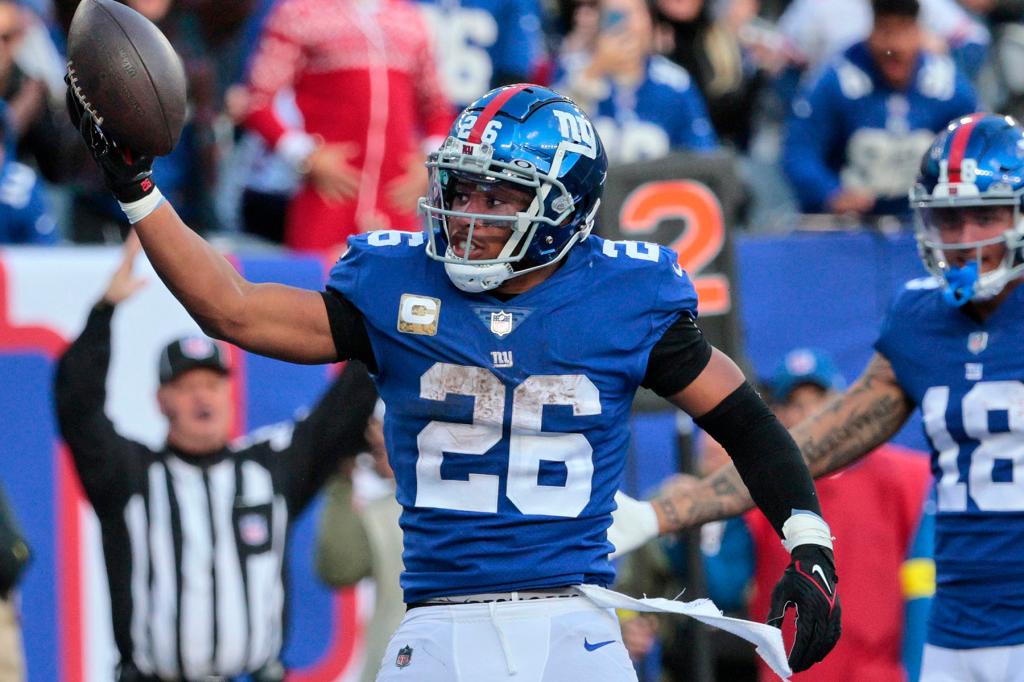 When the dust settles, the task in front of Joe Schoen will be dramatically different than anyone expected three months ago.

Saquon Barkley’s pending free agency was always going to be the biggest question mark, but before the season, it looked like Schoen would be piloting a rebuild instead of trying to build on a playoff appearance. Now, with the Giants at 7-2 following Sunday’s 24-16 win over Houston, it looks like it will be the latter barring calamity.

That changes the conversation around just about every decision, in particular Barkley, who had another standout game on Sunday, breaking the 150-yard mark for the second time this season and continuing to be the rock of the Giants’ offense in the win.

Barkley currently has the fifth-highest cap hit of any running back in the league at $7.217 million. If he stays in New York, it figures the 25-year-old will get a raise. If Schoen is ready to make that decision, and a report on Sunday said he isn’t, it is essential he has a better grasp on how to build a team around a star running back than his predecessor.

This is not to say the Giants should or shouldn’t extend Barkley. It is to issue a reminder that Dave Gettleman’s arrogance in drafting Barkley second overall in 2018, and insisting that drafting a running back so high was the right call, is a major reason why the Giants entered this season believing it to be a rebuilding year.

That is through no individual fault of Barkley who, when healthy, has done nearly everything in his power to justify the pick. The structure of the NFL, though, dictates that running backs are abundant, have short careers and don’t justify being picked early. To give Barkley the sort of extension he could command is not wholly unjustifiable — he provided another reminder of that on Sunday. But it would require Schoen to walk a tightrope in managing his roster and salary cap.

Next year’s Giants will not be this year’s Giants. Brian Daboll has caught lightning in a bottle this season, and should take that as far as he can, but Schoen’s job is to see the big picture, and he should not labor under the illusion that winning a lot of close games means that the Giants are suddenly ready to be a Super Bowl contender for the foreseeable future.

This roster has forced the conversation to change and there is no shortage of players who have proven they deserve to be a part of this team as it transitions. Still, Kenny Golladay’s contract is an albatross, there is a dearth of talent at receiver and tight end and though the Giants have won games with Daniel Jones, they have won them around him, not through him.

Acting as though this year’s record solves these problems over the long term is foolish. It is something that Gettleman’s Giants would have done, and that Schoen’s Giants must not do.

Barkley’s contract is the best example of a decision that must be approached with prudence, not rose-colored glasses, but it applies to everything Schoen does this offseason. The Giants need not look too far back to understand what happens when a playoff appearance is followed by a failure to address underlying problems — the last two times they made the playoffs, they failed to do so again the next season, and in 2017, fell all the way to 3-13, giving them the pick with which they took Barkley.

Schoen has done everything right so far, the record is evidence enough of that.

But the real test for him is yet to come.

🏈 CANNIZZARO: Giants’ Dexter Lawrence has his way with Texans: ‘He’s a monster’

Since you’ve been gone…

The Nets have shown an almost alarming willingness to do whatever it takes to put themselves in the best position to win basketball games. For most of the last two years, that has meant acquiescing to Kyrie Irving (and the rest of their stars) in embarrassing fashion. At this point, it might mean kicking Irving out of town.

Is it really all that shocking that the Nets seem to be playing freer, better basketball without Irving around? After Sunday’s 116-103 loss to the Lakers, the Nets have won four of six games since suspending Irving for his retweet of an anti-Semitic film and subsequent repeated failure to disavow the movie’s contents. Let’s think this through for a minute.

Irving has shown again and again and again that he is willing to put himself above the team. He publicly undermined Steve Nash as soon as Nash was hired, saying, “I don’t really see us having a head coach.” He refused to get vaccinated and missed two-thirds of last season. The Post’s Brian Lewis reported that he ignored play calls from Nash 10 times in an Oct. 29 loss. In his retweet and disastrous press conferences that followed, he created a major distraction that not only made it harder for the Nets to focus on basketball, but undoubtedly made life harder for the business side of the organization.

If there is ever a more selfish yearlong run for a player in American sports, it would be something to behold.

Irving will be a free agent after this season and it’s hard to imagine any organization taking on his toxicity in a trade before then. It’s equally hard to imagine the Nets re-signing him.

Maybe there are players — LeBron James, Kevin Durant — whose talent could justify these headaches. It’s not Irving, especially not with the Nets oh so coincidentally playing with a weight off their shoulders since he’s been in exile. From a pure basketball perspective, the best thing the Nets could do at this point is keep him there. Morally, it would be far from the worst thing they’ve ever done in the name of winning.

It’s good to be the king

Going into the final two weeks of the regular season, and after losses by UCLA and Oregon, a liberal reading gives us nine teams that still have a chance to make the College Football Playoff: Georgia, Ohio State, Michigan, TCU, Tennessee, LSU, USC, Clemson and North Carolina.

Of those, four are undefeated and control their own destinies: Georgia, Ohio State, Michigan and TCU, with the Buckeyes and Wolverines playing on Nov. 26 in Columbus in a de facto playoff quarterfinal assuming both get through this week unscathed. Tennessee is waiting to pounce for the eventual loser, though it is technically not guaranteed that the one-loss Volunteers would be ranked ahead of a one-loss Ohio State or Michigan. It figures that two-loss LSU, along with USC, Clemson and UNC, would all need significant help, as the latter three play in conferences without good enough competition to boost their résumés over, say, a one-loss Big Ten or SEC team.

Still, it is all there to play for, and unlike other years, there is a high chaos potential going into these last two weeks.

Except … in the matter of the national title favorite, it looks even more than last season as though it is Georgia and then it is everybody else. The Bulldogs have been played to within one score just once this season, and it was all the way back on Oct. 1. They toyed with Tennessee in a 27-13 victory over the Volunteers. They have much of the same offensive talent — Stetson Bennett, Brock Bowers, Ladd McConkey — that won the national title last season and a defense that is yet again stacked with NFL talent.

Currently, oddsmakers have Georgia hovering around -115 to win the national title depending where you look, and below even no matter where you look. Stranger things have happened — Nick Saban’s Alabama was knocked off by a heavy underdog Ohio State in the 2015 Sugar Bowl and by Clemson twice in national title games.

Maybe the Buckeyes have enough in their star-covered receiving corps, or Michigan has grown enough from last year’s blowout Orange Bowl loss to win an eventual playoff matchup. Maybe, like last year’s Bulldogs against Alabama, Tennessee can learn from its loss to Georgia and win a rematch. But prohibitive favorites are prohibitive favorites for a reason and until proven otherwise, Georgia’s shadow is looming like a constant over chaos.