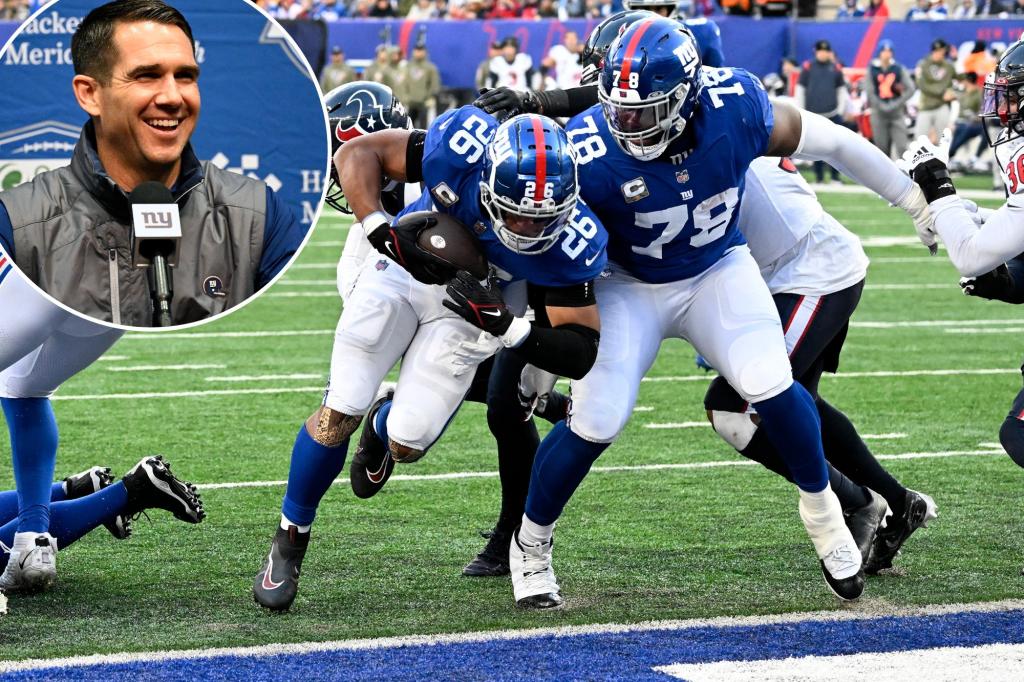 Julian Love wasted no time coming up with one word to describe these 7-2 Giants.

“We know that when it gets close, we’re gonna have the edge on teams.”

The Giants have every reason to believe they are a playoff team in no small part because of the badass who wears No. 26.

Saquon Barkley carried the ball a career-high 35 times for 152 yards and one touchdown, and has carried the Giants on his back during this vengeance Comeback Player of the Year season.

Whether he has to wait until after the season or not, he just finished giving the Giants all the reasons they need for them to make him an offer he cannot refuse.

Barkley is in no rush to get the dream deal done that will go a long way toward making make him a Giant For Life, simply because it has become obvious to the Giants that they need him every bit as much as he wants the Giants.

General manager Joe Schoen and the face of the franchise have tabled their recent preliminary negotiations until after the season.

“Obviously, we weren’t able to come to an agreement during the bye week, and my mindset is just focus on the rest of the season,” Barkley said. “When that opportunity comes up again, focus on it then.”

I asked him if he is OK waiting until the end of the season.

“I don’t really care about it, to be honest,” Barkley said. “I just want to win football games.”

After all the losing he has endured, it is exhilarating for Barkley to finally be winning football games.

“I’m just happy that we were able to have this conversation … I know how they feel about me,” Barkley said. “They spoke really high of me. We weren’t able to get anything done during the bye week, and I agree with Joe, just lock it up and worry for the rest of the season and make sure no distractions come out of it.”

What if the Giants changed their minds about waiting to strike a deal?

“I think I’ve kinda been vocal about before contracts was even brought up about how I feel about this place, where I want my legacy to be this place” Barkley said. “I want to be a Giant for life.”

The gold standard at running back is Christian McCaffrey ($16 million per season) followed by Alvin Kamara and Ezekiel Elliott ($15 million). There is always the franchise tag option, but Barkley is making his case to cash in in a bigger way. As much as it is risky business doling out a second contract to a running back, remember that Barkley won’t turn 26 until February.

“He’s one of those unique talents that come around so often,” Matt Breida said.

And just imagine when Daniel Jones, a model of efficiency (career-best 153.3 rating) on Sunday, starts using him as a weapon out of the backfield (1-8 receiving).

“I want to be part of the reason to help us get back on track, and we’re doing that right now,” Barkley said.

No one had to tell him he had 35 carries. “I guess my body felt it, I guess,” Barkley said, and chuckled. “I try my best not to focus on that and block it out and just stay locked in the game one play at a time. It is what it is. We were able to get the dub, get the win, and it’s my job to be a pro and take care of my body.”

The Giants made it obvious they were interested in Bully Ball, loading up the beef the way they did in front of Barkley.

“I love it,” he said. “It’s kinda just line up letting you know that we’re gonna run the ball. They couldn’t stop us.”

All throughout the game, Barkley exhorted his offensive line.

Before the two-minute warning, Barkley slid to stay in bounds short of a first down preceding a 49-yard Graham Gano field goal. Barkley had beaten himself up for failing to stay in bounds at the end of the Jacksonville game.

“Gotta keep the clock running, four-minute situation,” he said. “It’s not worth trying to run a guy over and get pushed out of bounds. I kinda learned my lesson from Jacksonville.”

“Think our offense runs through him,” Nick Gates said.

“He was fresh,” Daboll said. “So, he had a really good week of practice. We were handing him the ball at the 20 and he was running the ball to the end zone, 80 yards, and then coming back and doing it again.”