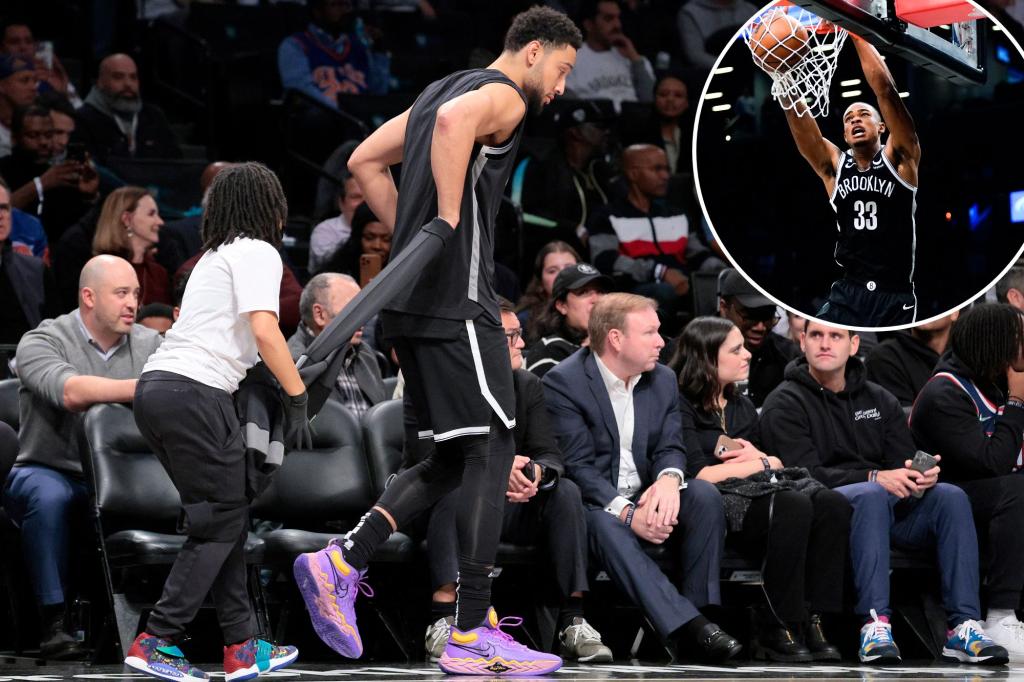 One Nets star, Kyrie Irving, is currently out of the picture.

Another Nets star, Ben Simmons, will remain out of the starting lineup.

The Nets will continue to start Nic Claxton at center and Edmond Sumner at point guard — complementing Kevin Durant, Royce O’Neale and Joe Harris — when they play at the Clippers on Saturday afternoon, head coach Jacque Vaughn said.

In 51 combined minutes this season, those five players have been a team-best plus-36. When Claxton and Simmons are on the floor at the same time, the Nets have been outscored by 32 points, as opposing teams have been able to exploit a pair of players who are not outside threats.

Simmons started the Nets’ first six games this season (five of which were losses) and returned Monday from a knee injury. In the two games since, both of which included Vaughn running the team, Simmons came off the bench and was alternated with Claxton.

“Especially with the second group, I think he’s done a good job, and he finished the game with the first group,” Vaughn said Friday at practice of Simmons, who shot 3-for-6 for six points, with nine rebounds and four assists Wednesday in a win over the Knicks. “He gives you the flexibility to be able to play fast, which you want to do, have space on the floor, still be big out there, rebound the basketball.

Simmons, coming off back surgery and a season in which he never stepped on the court, is still searching for his role and confidence. The 26-year-old, who mostly has been used as a big man, has taken four shots outside of 10 feet, and has made one.

Claxton has taken three, and has made none.

“It’s tough. Teams load up on both of us, and it kind of makes their job easy when both of us are on the court,” said Claxton, who entered Friday as the NBA’s leader in field-goal percentage (.717). “But hopefully, it’s a long season, we can work something out, and I think we can get to it at some point.

“Maybe not right now, but once Ben gets going a bit maybe we can work it out.”

A return by Simmons to his All-Star form is the hope, which probably would move him back into the starting lineup.

“He hasn’t played in a long time,” Vaughn said before the Nets embarked on a four-game road trip. “And consecutively, four [games] in five [days], six in nine, so it tests your mental and physical [strength]. And I think you’ve seen him start to progress.”

T.J. Warren, who has yet to debut with the Nets and has not played since undergoing foot surgery in January 2021, has started contact work with coaches, the team said. The 29-year-old forward will build up to playing at practice with teammates over the next week or two.

“He’s eager to play, so [getting] everybody back healthy is the main thing,” O’Neale said of Warren, who is coming off surgery for consecutive stress fractures in his left foot.

The wing exited the loss to the Mavericks on Monday with a sprained left ankle and has not played since.

“[He] did do some shooting today, so hopefully that’s trending in the right direction,” Vaughn said.

The Nets will dodge the Clippers’ Kawhi Leonard, who was ruled out for the game Saturday with a knee injury.