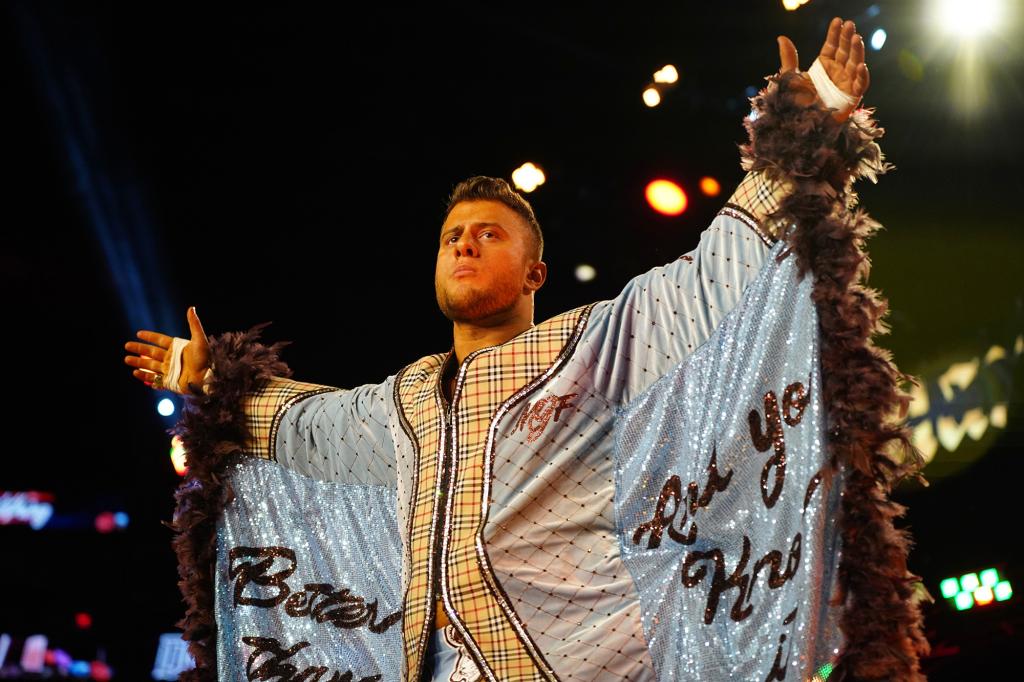 This is Maxwell Jacob Friedman’s moment to make good on it all – and he knows it.

Since 2015, the Plainview, Long Island native has been telling anyone who would listen he’s “better than you and you know it,” that he’s “the fastest rising star in professional wrestling” and a “generational talent.” He’s now at a point in his career where all those proclamations are coming to fruition at once.

“Professional wrestling hasn’t had a megastar in far too long and that’s who I am,” Friedman said.

MJF is currently one of the hottest acts in the business. He’s eliciting huge crowd reactions wherever he goes and is consistently one of AEW’s biggest weekly ratings draws. He’s also now being paid like a star, getting a raise before returning at the All Out pay-per-view after a four-month work/shoot contract dispute with AEW president Tony Khan. In addition, Friedman recently earned a role in his first feature film, “The Iron Claw,” with Zac Efron, about wrestling’s Von Erich family.

On top of all that, MJF has a chance to win the first major world title of this career when he faces rival Jon Moxley for the AEW world championship at the Full Gear pay-per-view at Prudential Center on Saturday (8 p.m., Bleacher Report). The 26-year-old, who is the MJF character 24/7, wants to take it even further than that once he finally holds gold.

“That world champion means you’re the best professional wrestler in the world and it means every single time I say, ‘I’m better than you and you know it,’ hasn’t been a lie,” Friedman said. “To me, it’s always been a fact.”

It’s why he considers the match with Moxley, the only three-time world champion in AEW history, so important. This will be MJF’s second attempt to win the title. Moxley defeated him at All Out in 2020 by using his finisher, which had been banned from the match, without the ref seeing him do so. Holding gold this time moves him a step closer to his biggest remaining goal. That’s having a long and fruitful world title reign to prove he can truly carry a company on his back and potentially take it to new heights because, as Friedman says, “I f—king s—t out gold bricks, I don’t even mean to.”

“I think what I bring is not just an absurd amount of awareness in platforms that we have not touched yet, what I also bring is stability,” Friedman said. “Let’s face it, this world title, it’s crowned the greatest pro wrestlers in the world and the sport today, but it’s also been jumbled a little bit recently.

“I feel now more than ever what AEW wrestling fans crave is stability. I am that. I’ve been that since Day 1. When my music hits, the reason the place goes absolutely insane is because they’re fully aware they’re about to get the perfect segment because that’s what I do every time I walk through that curtain whether you love me or hate me. I deliver.”

The jumble MJF refers to revolves around CM Punk, who had to relinquish the AEW championship without a defense because of two injuries in a span of four months. The most recent of those happened in September after Punk defeated Moxley in the main event of All Out and was then confronted by a returning MJF. Then Punk’s comments at the post-show press conference sparked a brawl between him and Kenny Omega and the Young Bucks. It caused all parties involved to be suspended and put Punk’s future in the company to be in doubt, tabling his feud with MJF maybe for good.

Friedman, who recently got engaged to longtime girlfriend Naomi Rosenblum, said he doesn’t feel cheated out of not getting to tell the next chapter of his story with Punk – one of his favorite wrestlers growing up – because he doesn’t “need any specific dancing partner” and praised Moxley for being a “flag bearer” for AEW. They are the two biggest stars in the company right now in his mind.

“This was a guy who during the height of the pandemic was defending his title, bleeding, sweating profusely in barbaric episodic week-to-week matches in front of no one, to a roar of nothing,” Friedman said of Moxley. “And he was still able to have people talking about the three letters that are AEW. That’s a guy who deeply cares about the fan base. That’s a guy who deeply cares about professional wrestling. So, in that aspect, I’m over the moon that I’m wrestling this guy.”

Even so, MJF counted the All Out press conference and its aftermath among the numerous times huge moments in his AEW career have been overshadowed by events out of his control, which he mentioned in a promo on Dynamite last week. Cody Rhodes unveiled his oversized American Nightmare neck tattoo for the culmination of their feud at Revolution 2020, a match MJF won. Matt Hardy’s injury was the talk the same day Friedman wrestled Moxley the first time for the title and Chris Jericho’s crash-pad landing, not a bloody MJF pushing him from the top of the Blood and Guts cage, was on the tip of everyone’s tongues after the special Dynamite last May. MJF said he gets “offended” each time he is not that talking point after a show he’s on.

“It hurt every time because I’m not just in pro wrestling, pro wrestling is my life,” Friedman said. “This is what I eat, sleep, live and breathe by. I could cry just talking about this. I care about pro wrestling more than anyone has in the history of the business and I can say that with a straight face because it’s the God’s honest truth.

“There’s a reason that every single time I go out there it’s incredible TV. It’s because I obsess over this s—t. This is my life. This is all I care about, OK, outside of making millions of dollars. I love this s—t.”

It’s all part of the “gigantic pyramid” sized chip that has been growing on his shoulder even before his days in pro wrestling and will continue to grow even if he becomes champion because the negativity drives him. Friedman, who is Jewish, remembers growing up as a kid with learning disabilities and at 14 the principal pulling his parents aside to say, “we’re worried about your son.” He said he had quarters thrown at him and was told to, “pick it up Jew boy” and had Nazi emblems written on his lockers. Football coaches told him he’s not worth a damn, even though he dominated on the field.

MJF said all of that pours out of him in the ring, on the mic and in the gym. The most recent instance was a promo with William Regal in which MJF unloaded on the former WWE talent scout for reneging on bringing him to NXT and an email he sent to tell him WWE only hires world-class athletes, the best of the best and he wasn’t one at that time. Friedman called getting to confront Regal on camera as “cathartic.”

“I feed off of negativity like no one else in the history of mankind,” Friedman said. “I swallow it and I use it as fuel. That’s just how I’ve been since birth.”

Though he hates being labeled a “heel,” negativity is the fan reaction MJF has mostly elicited throughout his career. However, thanks to his passion, undeniable talent and the level of reality in his on-screen stories, the audience recently has begun to embrace him – even loudly cheering in Chicago. Friedman is fine with all that. Just don’t expect him to stray from what’s gotten him there because he’s getting more of a “babyface” reaction.

“Being anything other than myself, fully authentically, doesn’t interest me. I am who I am,” Friedman said. “People will react to me the way they want to react to me. That’s megastar s—t. That’s John Cena s—t. That’s Rock s—t. That’s [Hulk] Hogan s—t. There were times in their career when they would come through that curtain and they got the loudest boo and there were times where they came through that curtain and they got the loudest cheer. That’s what I bring to the table. Think people need to stop worrying about fake bulls—t labels and just enjoy this ride because I’m over as s—t and it is fun.”

He believes changing one’s presentation based on crowd reaction is the “biggest mistake” one can make in pro wrestling. He equated it to if “Stone Cold” Steve Austin after his double turn with Bret Hart at WrestleMania 13 decided to start wearing all pink and to start wearing long tights and kick pads just because people like him.

“The reason that I am who I am is because I am authentic,” MJF said.

It’s also the reason he has been talking about the “bidding war of 2024” with his AEW contract expected to be up on Jan. 1 that year. Friedman reiterated that he didn’t sign an extension with the company upon his return and said that he kind of digs that people believe he did.

“I know the truth. I most certainly haven’t,” he said. “I think that wrestling fans are kind of just doing that to kid themselves. So maybe they feel a little less heartbroken as things are going on.”

With his recent movie role secured, Friedman now says the bidding war could become three-pronged with AEW, WWE and Hollywood and he’s “gonna go where the money’s at.” He did, however, give credit to Khan for making a greater financial commitment to him without an extension – even it if meant he would not have shown up to work had he not.

“What happens after the fact [in 2024] is entirely up to AEW management if they are willing to shell out the proper amount of money,” Friedman said. “Now I’ll tell you this, bonus and brownie points from Tony Khan for paying me what he’s paying me now with no extension. He did not have to do that.”

What Friedman needs to do now to make that time even more fruitful for him is finally become world champion and back up everything he’s said all these years — to leave no doubt about his place in the industry with a successful reign.

“I need to make sure there isn’t a single person in the world who can look at somebody to their right and their left and go, ‘Yeah, MJF’s good but this guy’s better,’” Friedman said. “Screw that, man. Once I win this world title, there is no one on my level.”