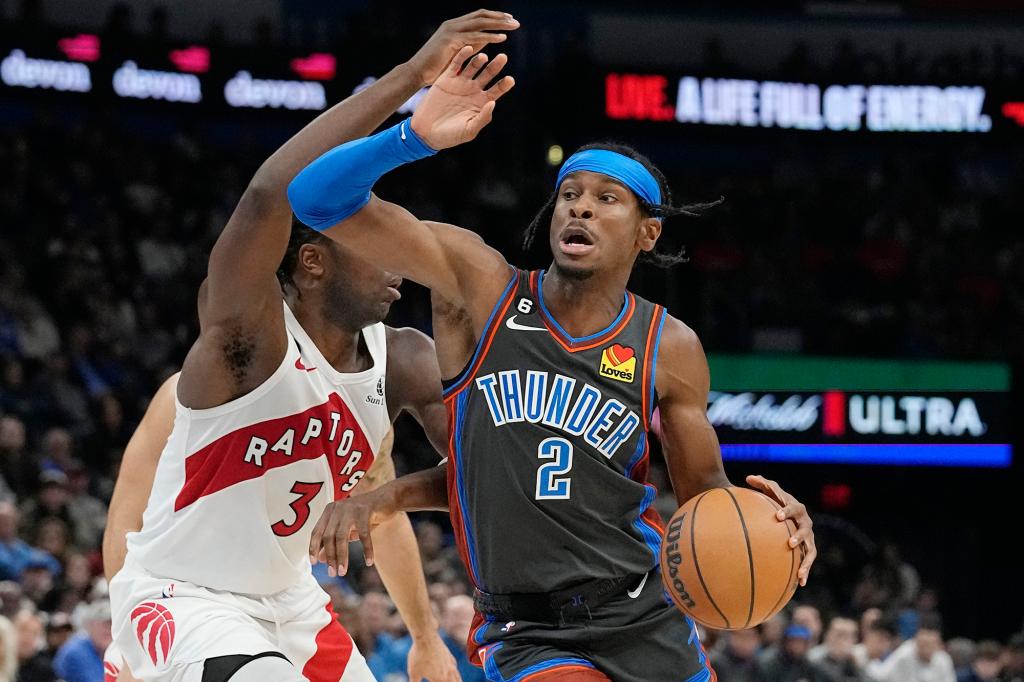 The Knicks’ draft vault is overflowing with first-round picks, but their roster is absent a difference-maker, which has been plainly obvious through a middling, 6-6 start.

They did not empty the coffers for Donovan Mitchell. Would they push in their chips for Shai Gilgeous-Alexander, an emerging star with plenty of ties to the Knicks?

The Knicks will host the unimpressive Thunder and will get a good look at Oklahoma City’s impressive young wing, who could be the next star traded, if he keeps rising and his team embraces tanking.

Gilgeous-Alexander is a 6-foot-6, active and athletic off-guard who can create his own shot and get to any spot on the floor. He has taken a leap this season, averaging 30.5 points, which was seventh-best in the NBA entering Saturday, on 53.9 percent shooting. He has scored the bulk of his points by slicing into the lane. Nobody makes more drives per game than Gilgeous-Alexander, who averages 24.2, about 1.5 more than Grizzlies All-Star Ja Morant.

The 24-year-old is shooting just 33 percent from 3-point range, but has attempted his fewest number of 3s since his rookie season of 2018-19. Gilgeous-Alexander is breaking out — and making a strong case for his first NBA All-Star selection — by breaking through defenses.

Add in his 5.5 assists, 1.5 blocks and two steals per game (which was the sixth-most in the NBA), and his long wingspan clogging lanes — and the Thunder either have an intriguing player to build around or an enticing asset to cash in.

Oklahoma City is 5-7 and currently out of the Western Conference playoff picture, but its handful of victories are on Gilgeous-Alexander’s back. The Thunder already have lost 2022 second-overall pick Chet Holmgren for the season, and trading Gilgeous-Alexander would widen their path toward landing generational prospect Victor Wembanyama in the 2023 draft.

There could be reason for general manager Sam Presti — who has shown he is not afraid of dealing stars, from James Harden to Russell Westbrook to Chris Paul to Paul George (who went to the Clippers in exchange for Gilgeous-Alexander, Danilo Gallinari and picks) — to pull the trigger.

And there could be reason for Gilgeous-Alexander to request a trade. The Thunder have not made the postseason since 2020, his first season in Oklahoma City, when they were knocked out in the first round of the bubble playoffs by the Rockets. The Thunder have gone 51-115 since and are likely heading for a lottery pick.

“I know what I signed up for when I signed a five-year extension,” Gilgeous-Alexander, in his first season of a $172 million maximum rookie contract extension, told reporters in September. “And I don’t think we’re going to be losing for much longer. … I believe in this team.”

Of course, many stars have adopted similar tones in public before asking to be shipped to a contender.

The Knicks, as currently constructed, are not a contender, but they should know Gilgeous-Alexander better than just about anybody.

They surely saw plenty of Gilgeous-Alexander at Kentucky while scouting for the 2018 NBA Draft, when they instead chose his teammate Kevin Knox at No. 9 — two picks before Gilgeous-Alexander was selected by the Hornets, who immediately dealt him to the Clippers.

Meanwhile, seemingly every Kentucky player is a fit for the Knicks of team president Leon Rose and senior executive William “World Wide Wes” Wesley. They both have strong ties to the program, which has helped land former Wildcats Immanuel Quickley and Julius Randle.

And just in case the Knicks needed one more connection to Gilgeous-Alexander, he and fellow Canadian RJ Barrett have committed to playing for Team Canada through the 2024 Summer Olympics. The national team’s general manager is Rowan Barrett, RJ’s father.

If the Thunder prioritize their draft position over a long-shot run at the postseason, the Knicks could be at the front of the line for Gilgeous-Alexander. They have nine first-round picks over the next five drafts, a cache that went untouched after Mitchell was dealt to the Cavaliers.

Is Gilgeous-Alexander the star the Knicks have sought for so long?

Maybe the matchup Sunday at Madison Square Garden can provide some clarity.