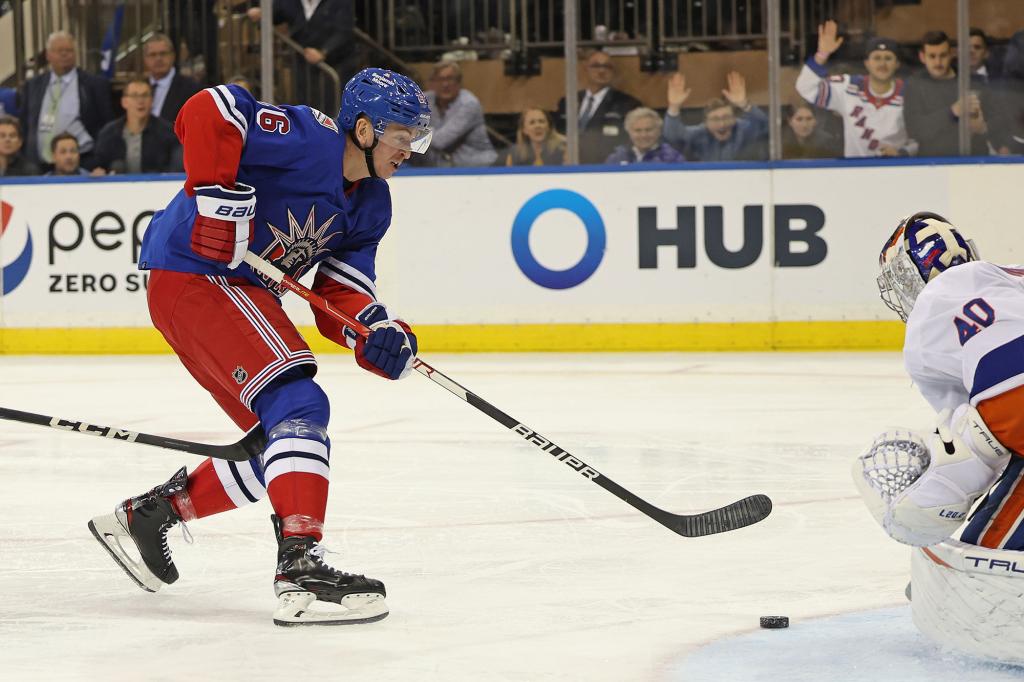 NASHVILLE, Tenn. — Jimmy Vesey can’t quite put his finger on it.

The 29-year-old wing said he feels that, since he resigned with the Rangers and over the last five or six games in particular, he’s skating better than he ever has before. Vesey doesn’t know what it is, he noted, but his confidence is starting to come through again.

“I’m just taking it in stride,” Vesey said after the Rangers hung six goals on the Red Wings in the third period Thursday night for an 8-2 win. “Getting a good opportunity to play in the top six the last couple of games, so you definitely want to help out and contribute. It’s been a lot of fun.”

After spending the first three seasons of his NHL career with the Blueshirts, Vesey became somewhat of a journeyman as he bounced from Buffalo to Toronto to Vancouver and then New Jersey throughout the following three campaigns. Over that span, Vesey primarily slotted into a bottom-six role, though he agreed he had to somewhat morph his game to fit into that situation.

Through the first 13 games of this season, Vesey alternated between the third and fourth lines. He was also a healthy scratch for a 5-1 loss to the Blue Jackets on Oct. 23. The Rangers needed to change things up as the offense found itself in a rut, however, which first landed Vesey on the right wing of the second line before he was bumped to the top line Thursday in Detroit.

Vesey posted his first multi-point game of the season in the win over the Red Wings, assisting on Mika Zibanejad’s 5-2 score before finessing a pretty shorthanded goal to cap the Rangers’ scoring frenzy. Rangers president and general manager Chris Drury said before the season that the club’s scouts had their eye on Vesey while he was with Devils last season, during which he had eight goals, including two shorthanded tallies, and seven assists.

Contributing on the penalty kill last season was something Vesey took pride in, he said. Now, he feels he’s working his way up the Rangers’ penalty-kill rotation, which has alleviated some of the workload from players such as Zibanejad, Chris Kreider and Barclay Goodrow.

“Obviously you see a lot of growth in him as a player but also as a person,” said Zibanejad, one of just two players (along with Kreider) who was with the Rangers when Vesey first signed with the team in 2016. “How he carries himself, the experience he got and I think he knows what he’s good at. After years you know what you do well, you try to do it as much as possible. You see the way he can skate, the way he can shoot the puck and he makes plays, the little plays that people might not notice.

“Obviously the work ethic, the effort is always there. I’m happy he’s back here.”

After returning to the Rangers on a professional tryout during training camp, Vesey impressed during the exhibition games and earned himself a one-year deal for the league-minimum of $750,000. He has now worked his way up to a shot on the top line. So far so good.

“It makes me go a little from defensive-minded to thinking, ‘If you’re going to play with those guys, their job is to score and you’re a part of it,’ ” Vesey said of playing with Zibanejad and Kreider. “I think it was big [Thursday night against the Red Wings], we had a power play goal and even-strength goals across the board. I think it’s a good sign for us. Pretty much the whole year — I know our record is what it is — but when we play to our capabilities, we can play with anyone and we can dominate teams at times.

“We’re hoping that this kind of snowballs for us and we get on a roll here.”