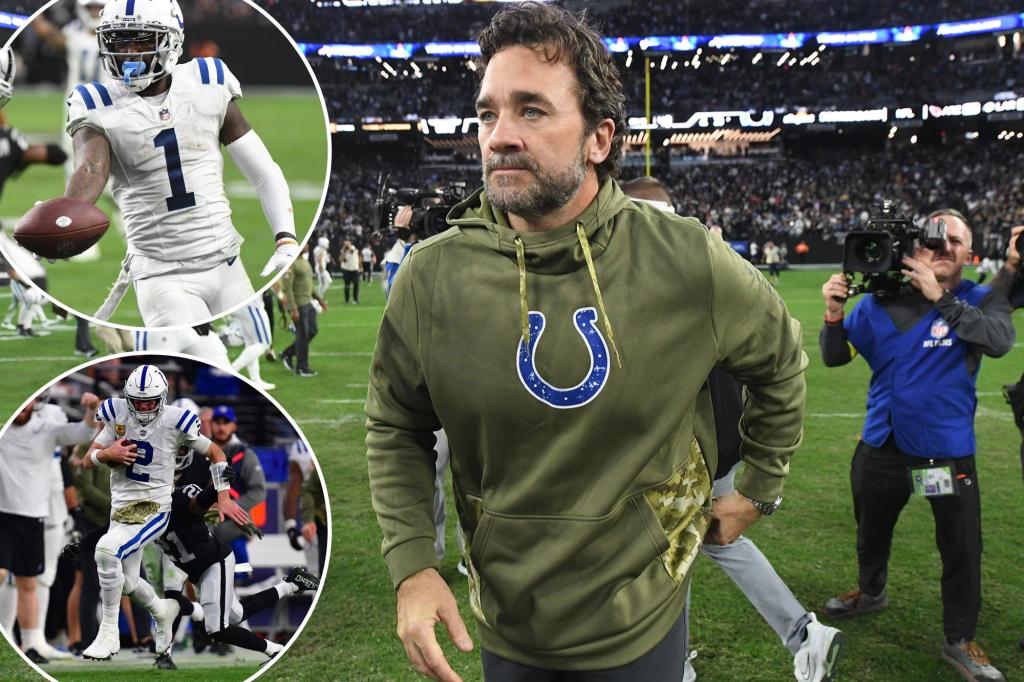 Ryan has never been known for his swift feet, but his career-best, 39-yard scramble to convert a third-and-3 in the fourth quarter led to his winning touchdown pass two plays later.

He completed a 35-yard pass to Parris Campbell with 5:07 left Sunday to give the Colts a 25-20 victory over the Las Vegas Raiders and Saturday — an ESPN analyst just a week ago — his first victory as the interim coach.

It capped an unusual week when the Colts fired coach Frank Reich and replaced him with Saturday, whose only prior coaching experience was at a Georgia high school. Saturday then handed play-calling to Parks Frazier, who had never been in that position. Finally, Saturday sat Sam Ehlinger, who started the past two games, and put Ryan back in the starting lineup.

“Jeff, he’s the thing that drives this thing,” Colts owner Jim Irsay said. “That’s the reason in bringing in him. I knew he had those abilities to come in and be a great leader and take over right away, because of all the help he had around him, because he knew to delegate. He, obviously, is thrilled with the victory, but in this league you’re on your next battle.”

Ryan had been battling a shoulder injury and wasn’t sure if he was ready to return. But Saturday said Ryan put together such a strong practice session Friday that it made the decision easy.

Ryan also benefited from a strong running game led by Jonathan Taylor, who rushed for 147 yards, including a 66-yard touchdown. It was Taylor’s first 100-yard game since the season opener against the Houston Texans, when he rushed for 161 yards.

The Raiders, however, led 20-19 when the Colts faced a third-and-3 in the fourth quarter. Ryan dropped back to pass, but the Raiders covered his options to the left where the Indianapolis receivers ran their routes. He then saw the right side wide open, and Ryan took off for Las Vegas’ 36-yard line.

“We were at a point in the game where we needed to make plays,” Ryan said. “We didn’t need to press or anything like that, but when you get your chance, you’ve got to make it.”

The Raiders then drove to Indianapolis’ 16, but two defensive plays turned away Las Vegas. On third down, linebacker Bobby Okereke broke up a pass in the end zone that was in the hands of tight end Foster Moreau. Then cornerback Stephon Gilmore knocked away a pass for Davante Adams that secured the victory for the Colts and set off a celebration on their sideline.

“In truth, I felt very at peace,” Saturday said. “I felt like we had a very good plan in place. I felt like all the men who I had talked about empowering and giving them the ability to do what they could do exceptionally well, they all stepped up.

“It’s an incredible day. It’s one win but, heck, they’re hard to get in this NFL.”

Two weeks ago, Saturday in his analyst role tweeted that the “Raiders look horrible” during their 24-0 loss to the New Orleans Saints, and those words clearly didn’t come back to bite him.

Adams was instrumental in helping the Raiders repeatedly rally in the second half, in which the lead changed four times. He caught six passes for 102 yards and a touchdown in the final 30 minutes, giving him nine receptions for 126 yards for the game.

The Raiders lost their third game in a row, and were booed off the field, with all three defeats coming to teams with losing records. This latest loss figures to increase scrutiny on first-year coach Josh McDaniels, who took over a team that made the playoffs last season, but is 2-7 .