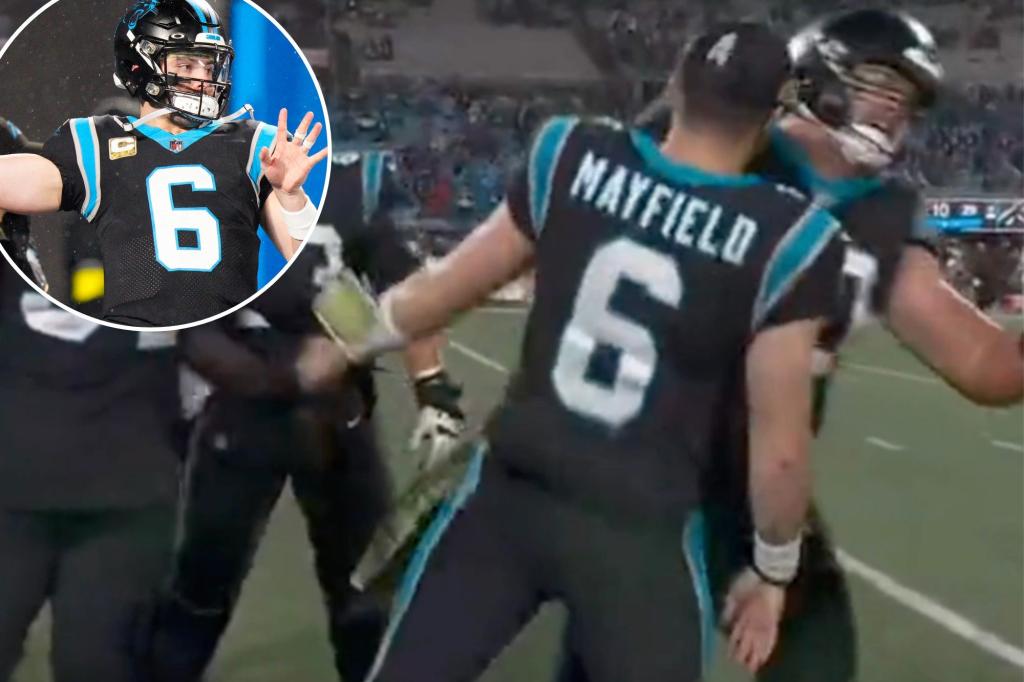 Baker Mayfield was certainly fired up following the Panthers’ 25-15 win over the Falcons on “Thursday Night Football.”

The 27-year-old quarterback – who did not play a snap in Thursday’s game – celebrated Carolina’s victory over its NFC South rival by headbutting a few of his helmet-wearing teammates while he only sported a baseball cap.

Given the growing concern around concussions and head health in the NFL in the wake of Dolphins quarterback Tua Tagovailoa’s scary incident in late September, the move naturally caught plenty of attention, with Amazon’s Al Michaels remarking, “Good way to wind up in concussion protocol even though you don’t get into the in the game.”

It’s been a rollercoaster of a season for Mayfield, who was traded to Carolina in July following four seasons in Cleveland, where the Browns selected him first overall in 2018.

Though Mayfield was named Carolina’s starting quarterback over the summer, he and the Panthers only won one game in his first five starts. Mayfield also suffered an ankle injury in a Week 5 loss to the 49ers. A short time later, Carolina parted ways with head coach Matt Rhule after two-and-a-half seasons.

In the wake of Mayfield’s injury, the Panthers turned to backup quarterback P.J. Walker. Carolina benched Walker last week in a blowout against the Bengals, with Mayfield playing well in the second half. Still, Walker got the nod for the Falcons matchup.

Walker went 10 for 16, throwing for 108 yards in rainy and windy conditions in Charlotte.

The Panthers, who improved to 3-7, will visit the 6-3 Ravens next Sunday.