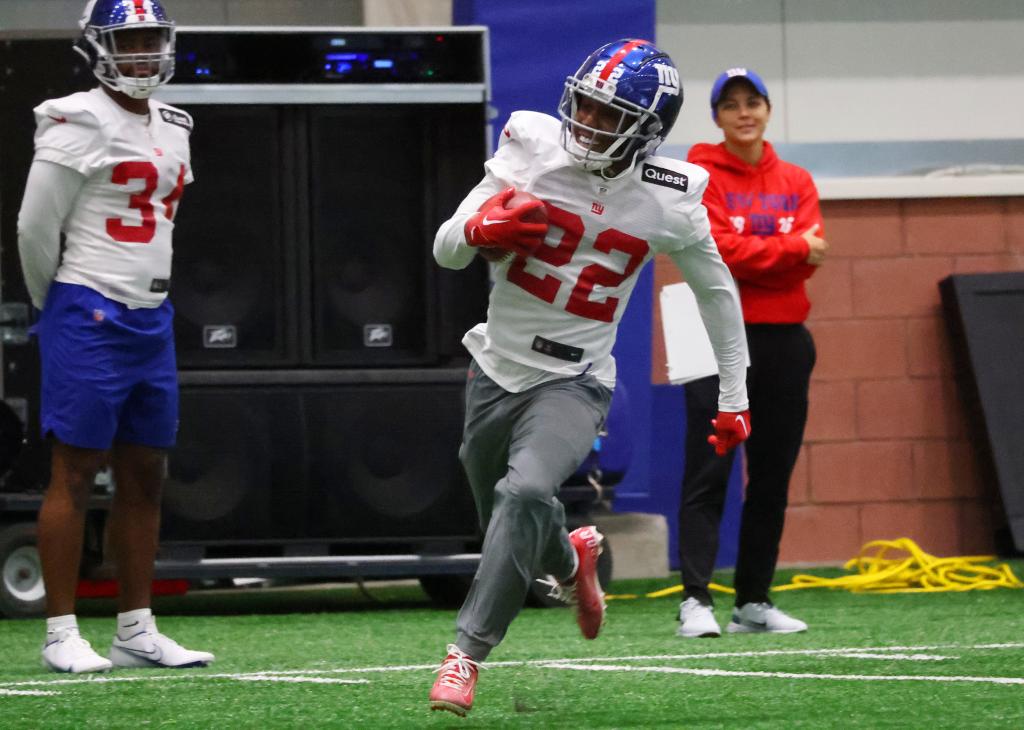 If there hadn’t been an hour still remaining in Giants practice, Adoree’ Jackson might have just kept running through the end zone, through the doors to the inside facility and outside with the ball in his hands.

Jackson sure looked the part of returner — and the uncatchable Forrest Gump — as he fielded kickoffs and punts Friday and broke a big return down the sideline with a convoy of teammates cheering him on. The Giants, as they exit their bye week, are mulling a change at punt returner after Richie James lost two fumbles in their most recent game.

“When I fell in love with punt returns was when Reggie Bush was doing it in 2004, 2005-ish,” Jackson said. “When I’m back there, I’m trying to judge it right. The first thing they always teach you is look the ball in — catch it and secure it — and go from there. To be back catching punts, makes me feel like I’m back in the old days.”

The pros of the Giants going with Jackson are his experience and the opportunity for an explosive play. He averaged 8.8 yards on 53 returns with the 2017-19 Titans and 12.6 yards with four touchdowns on 46 returns (2014-16) at USC. The con is leaving the team’s top cornerback susceptible to big hits and injuries. Is that risk enough to be a deterrent?

“We’ll see how that goes with who we put back there, but that wouldn’t [stop us],” head coach Brian Daboll said. “He’s been a good returner in the past, and if we think that’s the best thing for our team, we would use him. You put your best guys that you think are going to give you the best chance back there.”

Daboll drew on his experience as Patriots receivers coach when New England used leading pass-catcher Troy Brown as a punt returner. The Giants’ other options are to stick with James, use nickel cornerback Darnay Holmes or elevate rookie Kalil Pimpleton from the practice squad. Jackson downplayed the possibility it will be him.

“I don’t think it will be me,” Jackson said. “I just like doing it to get warmed up. I just like messing around with it … for the nostalgic feeling.”

OLB Oshane Ximines (quad), WR Kenny Golladay (knee) and CB Cor’Dale Flott (calf) are listed as questionable to play against the Texans on Sunday. They have missed two, four and five games, respectively. Daboll said he is “optimistic” about Golladay, barring a setback.

WR Marcus Johnson (thumb) was added to the injury report as a limited practice participant Friday, but is expected to play.

The Giants, who have two empty spots on their 53-man roster, could have a lot of roster machinations in the next few days.

A decision is due by this coming Wednesday on RT Matt Peart and CB Rodarius Williams. After three weeks of practicing, they must be activated or shut down for the season. OG Shane Lemieux is back at practice, with two more weeks to decide on his return if necessary.

If LB Landon Collins is elevated from the practice squad Saturday, as expected, it will be his third and final promotion, meaning the Giants must sign him to the active roster in order to keep playing him. Collins, a former three-time Pro Bowl safety, is playing linebacker for the Giants, but could his roots come into play during safety Xavier McKinney’s four-game injury absence?

“He’s been more of the down closer to the line of scrimmage than rather back for us,” Daboll said, “but you never know.”