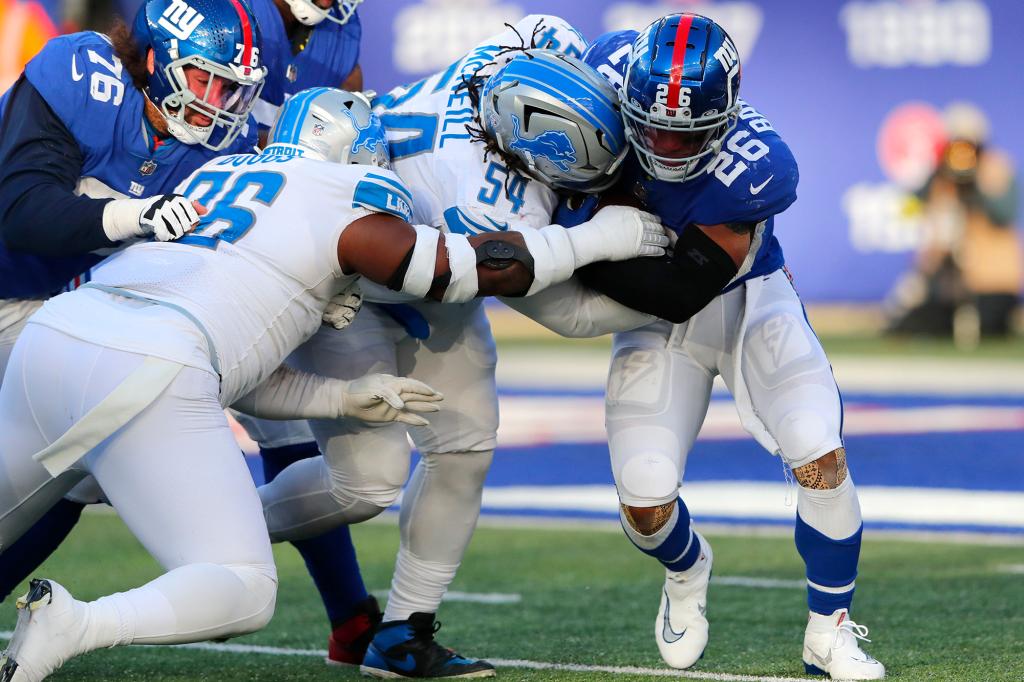 Grading the Giants’ 31-18 loss to the Lions at MetLife Stadium on Sunday.

Yeah, this was not going to work. Cut off the head (Saquon Barkley) and the body will crumble. Barkley had no room to run (15-22) as the blocking in front of him caved in. Forced to throw is no way for this attack to thrive. After 153 consecutive passes without an interception, Daniel Jones (27 of 44, 341 yards) tossed two of them — the first was a real killer. Jones (7-50) was a factor with his legs. Rookie WR Wan’Dale Robinson had nine catches for 100 yards before leaving with a knee injury. LG Shane Lemieux on his third snap of the season was beaten by Alim McNeill for a sack. We have a Kenny Golladay sighting: He caught two passes for 29 yards and was cheered (derisively). Lawrence Cager dropped a two-point conversion pass in the end zone. Injuries cost the offensive line three starters. Going 5 of 13 on third down is not good enough.

Giving up four rushing touchdowns is a gut-punch and allowing 160 yards on the ground is unacceptable. Jared Goff (17 of 26, 165 yards) was not sacked. Oshane Ximimes kept the opening Lions drive alive with a roughing the passer penalty for hitting Goff up near the head. Darnay Holmes had a big tackle to stop D’Andre Swift short of a first down in the second quarter. Rookie LB Micah McFadden was exploited in coverage. At one point, the secondary consisted of backups Rodarius Williams and rookie Cor’Dale Flott at cornerback. Flott forced a fumble but the Lions recovered. Jamaal Williams ran for three TDs. Julian Love missed a tackle on Kalif Raymond. Lions converted 6 of 13 on third down and the Giants did not force any turnovers.

Graham Gano’s first extra point try was blocked and pushed wide right. Gano, who was sick and needed IVs during the game, early in the fourth quarter clanged an extra-point try off the right upright. Shocking. Adoree’ Jackson was hurt returning a punt. Gary Brightwell muffed a kickoff (he recovered) and then Nick McCloud was called for an illegal block in the back on a kickoff return. Cam Brown was called for a personal foul on the extra-point defensive team. Jamie Gillan dropped a punt on the 8-yard line but then hit a bad one that floated only 25 yards. To start the second half, Justin Jackson had a 36-yard kickoff return.

Brian Daboll ultimately signs off on the top cornerback being used as a punt returner and so he has to take it when that player goes down with an injury. Daboll opted to go for it on fourth-and-1 from the Detroit 49-yard line in the first quarter, an early show of aggressiveness that paid off. There is only so much defensive coordinator Wink Martindale can do when his secondary is depleted like this. We all wondered what would happen when Mike Kafka had to call so many pass plays. Now we know. The offense is not built to thrive in these situations.