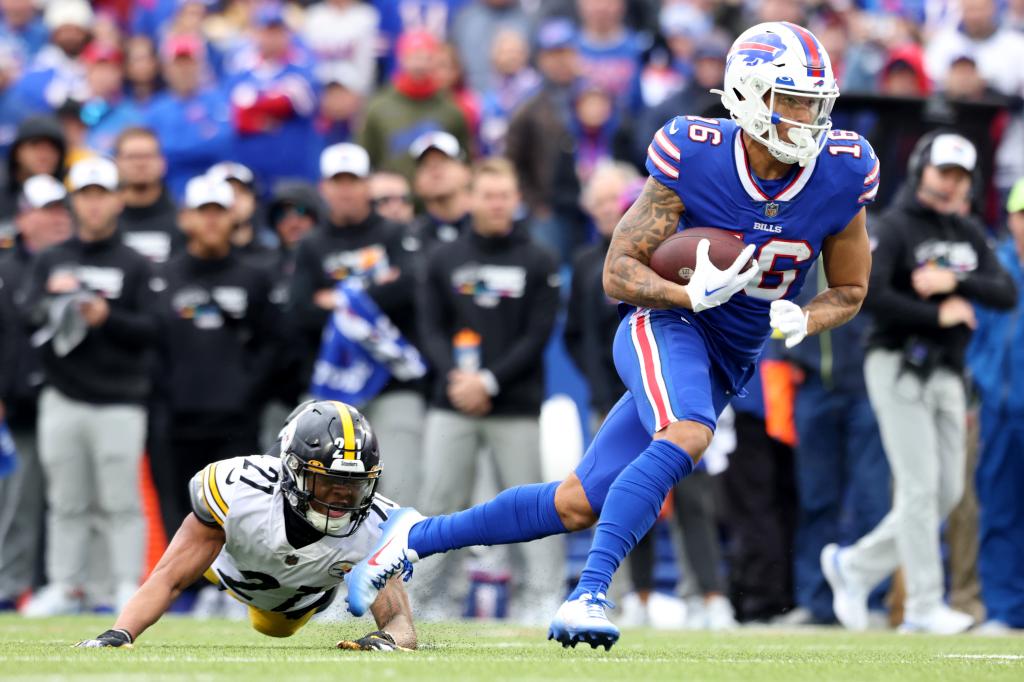 Wide receiver Isaiah Hodgins, newly signed by the Giants, could be a part of the offensive package sooner rather than later. Hodgins knows the playbook, as he was with the Bills last year when Giants head coach Brian Daboll was Buffalo’s offensive coordinator. A big target at 6-foot-4, Hodgins has appeared in three games for the Bills (two earlier this season) and has four career receptions for 41 yards.

“There’s definitely a lot of familiarity with Isaiah in the offense and having some experience with that,’’ Giants offensive coordinator Mike Kafka said. “He’s been great to come in and plug into the offense. There’s a lot of familiarity for him offensively. There’s some new things that we might have changed and just different verbiage, but he’s handling that great.’’

The receiver position is finally getting healthy. Kenny Golladay is expected to play after missing the past four games with a knee injury. Rookie Wan’Dale Robinson missed four games earlier this season with a sprained knee, but was on the field for 98 snaps the past two games.

In addition to safety Xavier McKinney, the Giants lost another starter on defense when DT Nick Williams was placed on season-ending injured reserve with a torn biceps. Williams was probably the most under-the-radar player on the roster, starting seven of the first eight games. Williams had 15 combined tackles and two quarterback hits, and the Giants will have to figure out how to maintain and try to improve the league’s 25th-ranked run defense without him.

“Big, strong, smart guy,’’ Dexter Lawrence said of Williams. “Vet. Teaches you a lot of things, things to look for, how to play different things. Him not being there is gonna be a big loss. Now other guys have to step up. I think we’ll be ready.’’

The Giants are not deep on their defensive line, with Justin Ellis — a 334-pound, nine-year veteran — the only backup on the roster. Look for Jihad Ward to move inside from defensive end in pass-rush situations.

The moves the Giants made in advance of Sunday’s game do not bode well for Landon Collins, who was not elevated from the practice squad. Clearly, the coaching staff does not view Collins as a viable option at safety, even with the loss of McKinney with fractured fingers on his left hand. Collins, a Pro Bowl safety earlier in his career with the Giants, has been used in a limited role as a linebacker this season.

The Giants will elevate TE Lawrence Cager and DL Henry Mondeaux from the practice squad. They will also activate OT Matt Peart from the physically unable to perform list.

It would be a daring move for the Giants to activate Kalil Pimpleton off the practice squad and hand him the punt-return duties. A change is brewing after Richie James lost two fumbles in the Week 8 loss at Seattle, leading to 10 points for the Seahawks. Pimpleton, an undrafted and undersized rookie receiver from Central Michigan, averaged 19 yards on 16 punt returns as a senior.

“Since he’s been here, he’s been back there catching punts,’’ special teams coordinator Thomas McGaughy said. “So, he gets his work every day, he catches after practice. I mean, all those guys are catching.’’

More likely, the Giants will give the punt return duties to cornerback Darnay Holmes, who has one punt return in two seasons — the one after James was forced out with a concussion against Seattle.

The Giants would like some pop in the return game, but the main focus is always the same: Secure the ball.

“Obviously, you can’t put the ball on the ground,’’ McGaughey said. “We all know that. That’s a no brainer.’’

The Giants’ coaching staff knows all about DE Jerry Hughes, who played for the Bills when Daboll and offensive line coach Bobby Johnson were with Buffalo. Hughes, 34, leads the Texans with seven sacks and seven quarterback hits.