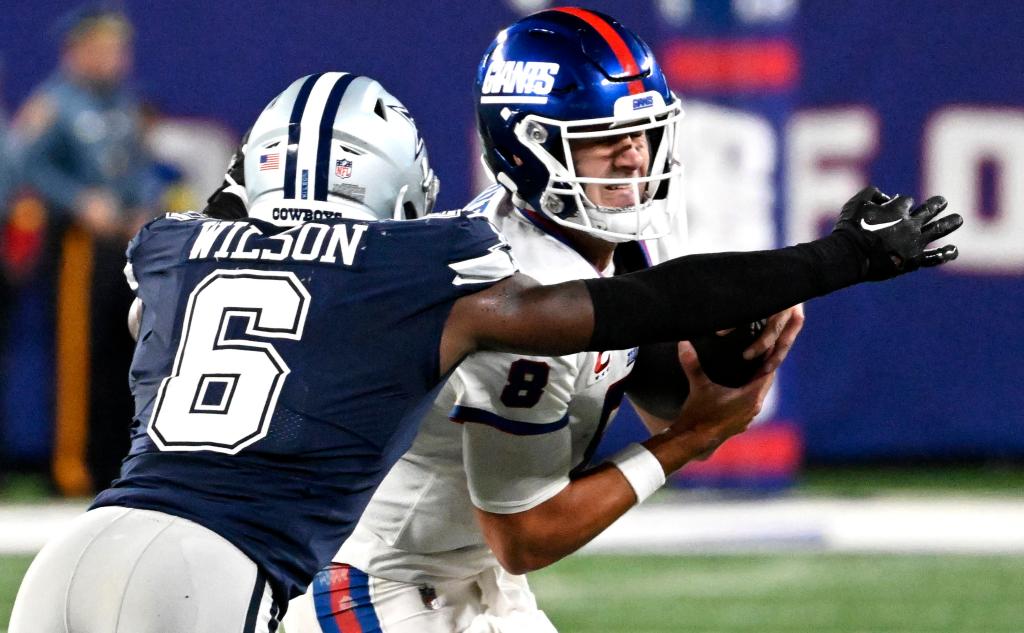 There are a couple of hurdles the Giants are going to need to negotiate if they hope to survive their Thanksgiving Day pilgrimage to Jerry’s World. You can start with the Cowboys themselves, of course, since Dallas has already beaten the Giants once this year, in Week 3, and is coming off an extraordinary annihilation of one of the NFC’s best teams, the Vikings.

Depletion is another. The Giants’ already-Iggy-Pop-thin receiving corps is banking on a next-man-up hero, and is on the verge of having to call up either Amani Toomer, Homer Jones or Stephen Baker the Touchdown Maker just to field the standard 11 on every play. The offensive line is dinged up. The secondary is looking more tertiary by the day.

But there is also this:

Would you care to guess a) who was the last Giant to score an offensive touchdown on Thanksgiving Day and b) who the President of the United States was that day?

That would be a) Dale Burnett and b) Franklin Delano Roosevelt.

That was Nov. 24, 1938. Yes. Thursday marks the 84th anniversary of that sacred event. Now, it’s true that while the Giants were regular turkey-day workers in the early days of the league (11 times between 1926 and ’38, all of the games local tilts against the since-deceased Brooklyn Lions, Staten Island Stapletons and Brooklyn Dodgers), that also includes four games in the Super Bowl Era, starting in 1992.

That was the year that Lawrence Taylor executed perhaps his single-most famous play, intercepting Detroit’s Gary Danielson at the goal line and rumbling 97 yards for the game-winning TD in a 13-6 win over the Lions. It’s also the only one of those “modern” games the Giants have won. They’ve fallen 30-3 to the Cowboys in 1992, 26-6 to the Broncos in 2009 and 20-10 to Washington in 2017; Jackrabbit Jenkins scored the only other Giants TD, also on a pick-six in that ’17 game.

So if you haven’t gotten enough turkey, the Giants have been happy to furnish you with more whenever they’ve been on the Thanksgiving rotation.

Yes. There’s a lot of things stacked against Big Blue when they travel to Big D this time, fixing for revenge and also to avoid back-to-back losses for the first time this year. Naturally, Brian Daboll isn’t caught up in any of that, because it’s his mission to keep things simple for his players — at least the ones healthy enough to board an airplane.

“Prepare to play a game,” the Giants’ rookie coach said of the way his team has gone about its business this week. “It’s really that simple: prepare to play a game. It’s a short week; everybody plays them. So, do a good job in the walk-throughs. Do a good job on studying the team that we’re playing, and make sure that we’re ready to go. Take care of our bodies and get ready to go to Dallas.”

Everything the Giants have fought and clawed for this year is still available to them, even after the buzzkill of last Sunday’s 31-18 loss to the Lions, even after losing two of their last three games, even with the specter of a tightly packed NFC East getting ever tighter now that the Commanders have gotten a little frisky in recent weeks.

The Giants still have five of their six division games ahead of them, starting at AT&T Stadium Thursday. They have put themselves in position for these games to matter. And even if the Cowboys are coming in off a dominating 40-3 win at Minnesota last week … well the hallmark of recent Cowboys teams is that the best time to greet them is when they are dealing with a prosperity that they never quite know how to handle.

Plus, the whole league will be watching.

As deep as the rivalry between the Cowboys and Giants is, it’s remarkable the two have only collided once on Thanksgiving Day — in 1992, the dying days of the Ray Handley Era, a 30-3 shellacking that was part of a 1-6 spin-out to close out a desultory period in the team’s annals.

The Giants expect so much more from this season. It would be helpful to return home a football team, and not an even-more-crowded MAS*H unit.