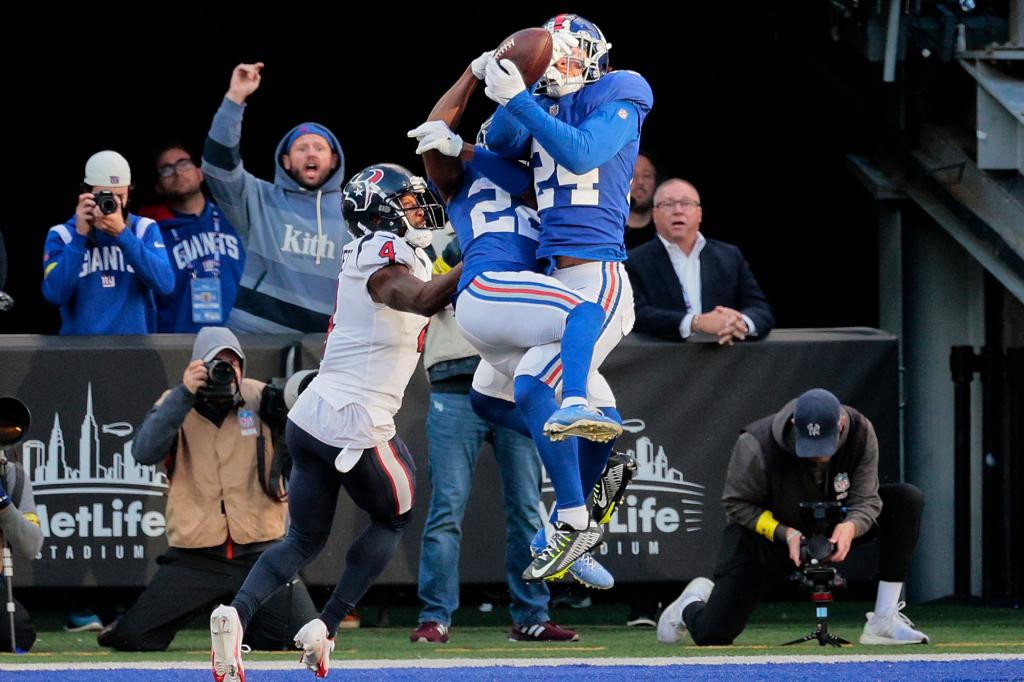 Giants rookie safety Dane Belton was a step late with his help coverage Sunday and the Texans capitalized with a fourth-quarter touchdown to cut their deficit to one score. Or so it seemed until a penalty flag negated the touchdown and Belton was gifted a do-over, which became an interception in the end zone on the next snap.

“We were playing a coverage where I was deep and inside, and I was a little late on the first one,” Belton said. “I feel like I could’ve made that play. The play right after, coming back to it, I had seen it right before, so being able to go make a play was big.”

Belton and second-year pro Jason Pinnock quieted one of the biggest stories of past week — and maybe the biggest adversity the Giants have faced this year — by stepping in seamlessly for co-captain Xavier McKinney to help the Giants to a 24-16 win against the Texans at MetLife Stadium. McKinney broke his hand riding a Can-Am all-terrain vehicle during the bye week.

“It was a no-flinch mentality,” Pinnock said. “We prepped, we communicated all week and went out there just as confident. And did what we did.”

Drafted by the Jets in 2021 and moved from cornerback to safety, Pinnock contributed 1 ½ sacks in playing his largest role on defense since joining the Giants as a waiver-wire addition after training camp.

“It feels good to show them I’m more than just a special teams guy,” said Pinnock, adding that blitzing is a “little bit of both” natural ability and defensive coordinator Wink Martindale bringing it out of him. “I showed an ability to get off the edge a little bit in practice.”

“Early on this week we really learned that it’s not going to be, ‘You do Julian’s role and he’ll do [McKinney’s] role,’” Love said. “I wish it could be as clean. It was a group effort.”

Belton underwent “precautionary” postgame X-rays on his “upper body” after hitting the ground late in the game, but he doesn’t expect he suffered a “major” injury. He said it is not related to the broken collarbone that caused him to miss almost all of training camp.

Belton’s interception to preserve a 21-10 lead with 9:55 remaining was a perfect example of Martindale’s mindset that “if a play happens, you owe two now.”

“It meant everything being able to make a play, especially with our backs against the wall,” Belton said. “Just doing my job. Nothing more.”

McKinney will miss at least three more games, with no guarantee of returning this season.

“We allowed some guys to play to their strengths,” Love said. “Pinnock plays incredibly hard, whether it’s special teams or defense. We put him in position to get after the quarterback and all of us knew he was about to get after it this game. Dane, throughout the course of the season, he’s always around the ball. It was inevitable he would get one.”