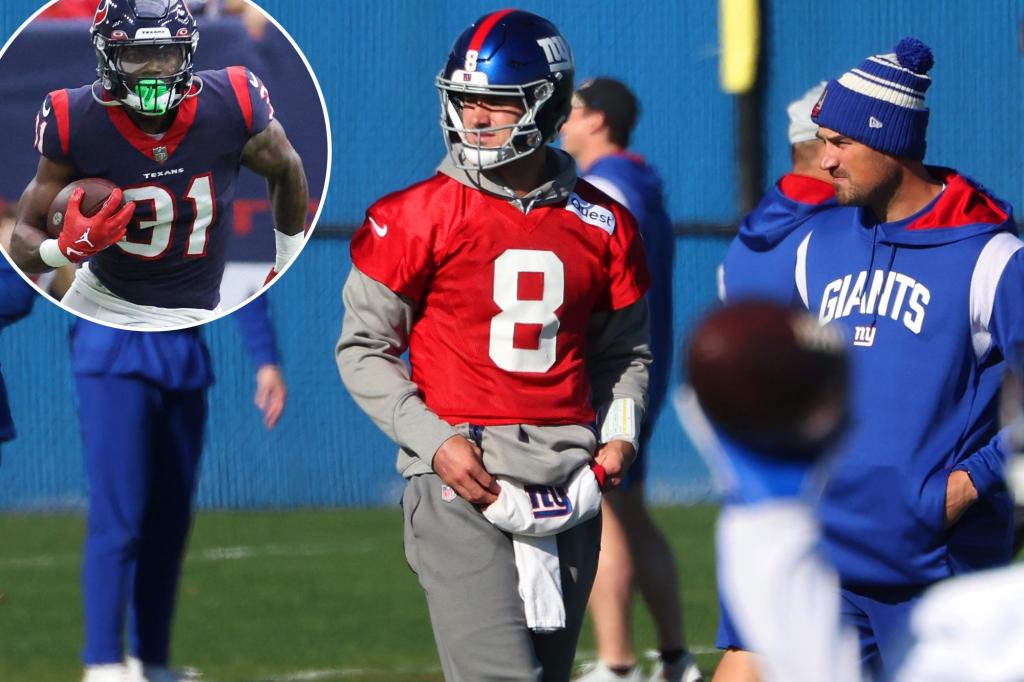 In recent years, opposing coaches have noticed the Giants on their schedule and scrambled to try to convince their players that the Big Blue linebackers played like Lawrence Taylor and the defensive ends played like Michael Strahan and the receivers made catches like Odell Beckham Jr., etcetera.

What we have now in this topsy-turvy NFL season is a 6-2 Giants team, energized and professionalized by rookie head coach Brian Daboll, that has been warned repeatedly it should not be welcoming the Texans (1-6-1) to MetLife Stadium on Sunday with open arms.

Because in the midst of a stunning renaissance, a reversal of fortune no one saw coming, it is the Giants who have watched film of hellbent Texans rookie running back Dameon Pierce and told themselves that this is the modern-day Earl Campbell, a Hall of Fame bulldozer from yesteryear for the Houston Oilers.

Daboll has been so relentlessly consistent with his messaging all season, you get the feeling that if he ever took the Giants to a Super Bowl, his Saturday night speech to the team might go something like: “Let’s just go 1-0 this week, fellas.”

The Trap Game is a coach’s worst nightmare, because human nature is always eager to rear its ugly head and upset the applecart.

In Daboll World, you are not necessarily what your record says you are.

Bill Parcells used to place mousetraps in the locker rooms and hallways at his various coaching stops, with a piece of cheese in the mousetrap in the hallway one time with the Cowboys.

“The message is he doesn’t want us eating the cheese thrown our way,” Drew Bledsoe said.

The inimitable Parcells said: “It means there might be mice in the building. That’s where they go … in the ceiling. You never had a house on the East Coast? That’s where they go. There are a lot of vehicles to teach with. They don’t all have to be words and pictures.”

“Parcells used to always say, ‘Don’t bite the cheese,’ ” former Cowboys cornerback Terence Newman said once. “When people are telling you you’re good, you have to look in the mirror and know exactly where you are as a team, where you are as a player, where you are as an offense, defense and special teams. We look at the film and we know we’re not nearly as good as we can be, so to me that’s how you avoid being disappointed in a trap game.”

“[Payton will] find unique way to make sure young guys never get complacent,” former Saints QB Drew Brees told journalist Graham Bensinger once. “Little things that he’ll say, like he might put a mouse trap in your locker or something like that, and he’s got a saying ‘Don’t eat the cheese.’

“In other words, don’t believe the stuff other people are feeding you about how great you are and all this other stuff. Don’t eat it man. It’s a trap. You’ve got to keep working.”

Former Dolphins coach Dave Wannstedt hung lobster traps from the ceiling of the Dolphins locker room before a 2002 road game. Former Colts coach Chuck Pagano placed mousetraps in his players’ lockers before a big road win in Jacksonville in 2013.

The Giants are 4.5-point favorites coming off their bye and are asking Julian Love to take over defensive play-calling duties from Xavier McKinney, who is out after breaking fingers in a bye-week accident.

“Everyone’s good. Every coach is good. Every player is good,” Daboll said to Giants.com. “And that’s our approach each week, regardless of who we play.”

You can’t be a playoff team if you lose the games you cannot afford to lose. A meaningful nine-game season that could lead to playoff heaven can quickly become meaningless in an unforgiving NFL.

“You focus on what’s gonna get you there, you focus on what’s important right now,” Jones said, “and I know we have the perspective. I think we got smart enough guys to realize that that’s only gonna happen if we take care of business week to week, and handle what’s right in front of us right now, and that’s the Houston Texans. It’s a good football team, and we’ve gotta play our best ball on Sunday.”

Don’t fall into the trap.