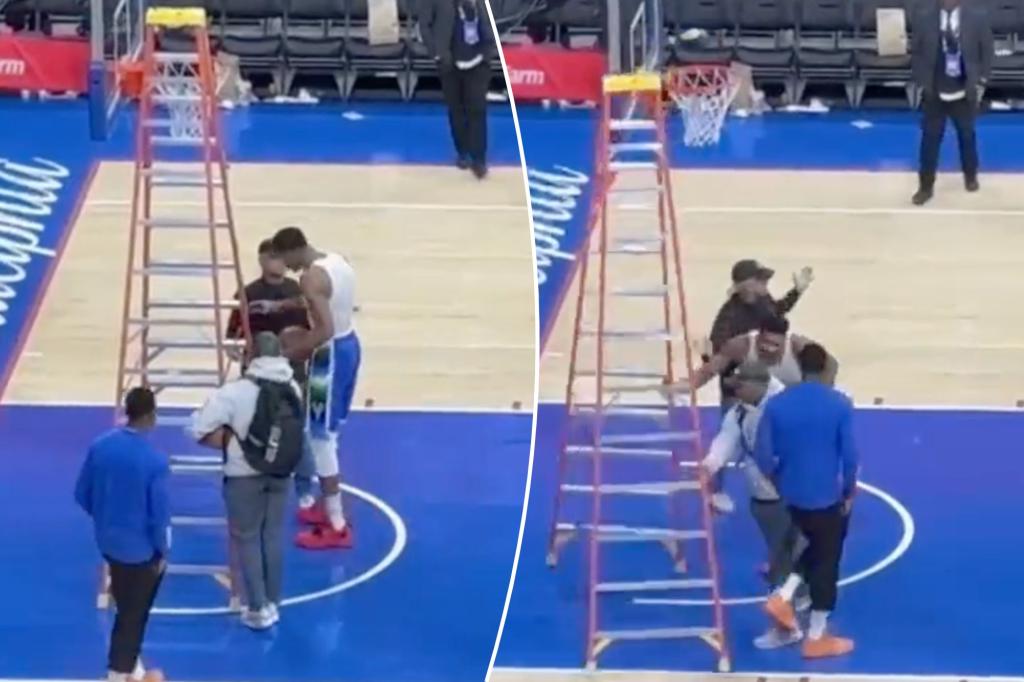 Giannis Antetokounmpo was not going to be denied from his free-throw practice.

The Bucks’ superstar was seen in a video Friday night angrily shoving away a ladder being used by Wells Fargo Center staff after the Bucks’ 110-102 road loss to the 76ers.

The staff members were using the ladder near one of the baskets, seemingly to fix or check something on the basket they could not reach. The normally easy-going Antetokounmpo, however, wanted to take free throws on the basket and began to try to move the ladder away from the workers as other employees watched.

The workers did not budge on Antetokounmpo’s original attempt, however, leaving the ladder in place and appearing to say something to Antetokounmpo. That’s when the former two-time MVP stormed back under the basket, yelled something adamantly at one worker and then proceeded to rip the ladder away and toss it aside.

The ladder toppled over and fell on its side as the worker stood perplexed with his hands raised before walking away. Antetokounmpo then walked to the free throw line and took a practice shot as if nothing had happened.

“Don’t be an a–hole,” a spectator can be heard saying in the video.

“Did that just happen?” another could be heard asking.

Nobody appeared to be injured in the incident.

Antetokounmpo scored 25 points but struggled mightily from the free throw line, going 4-for-15 in the loss. He also endured a physical battle with 76ers star Joel Embiid, which came to a boiling point when Embiid forearmed Antetokounmpo’s chest on a fast break. Embiid was issued a flagrant one foul for the incident.