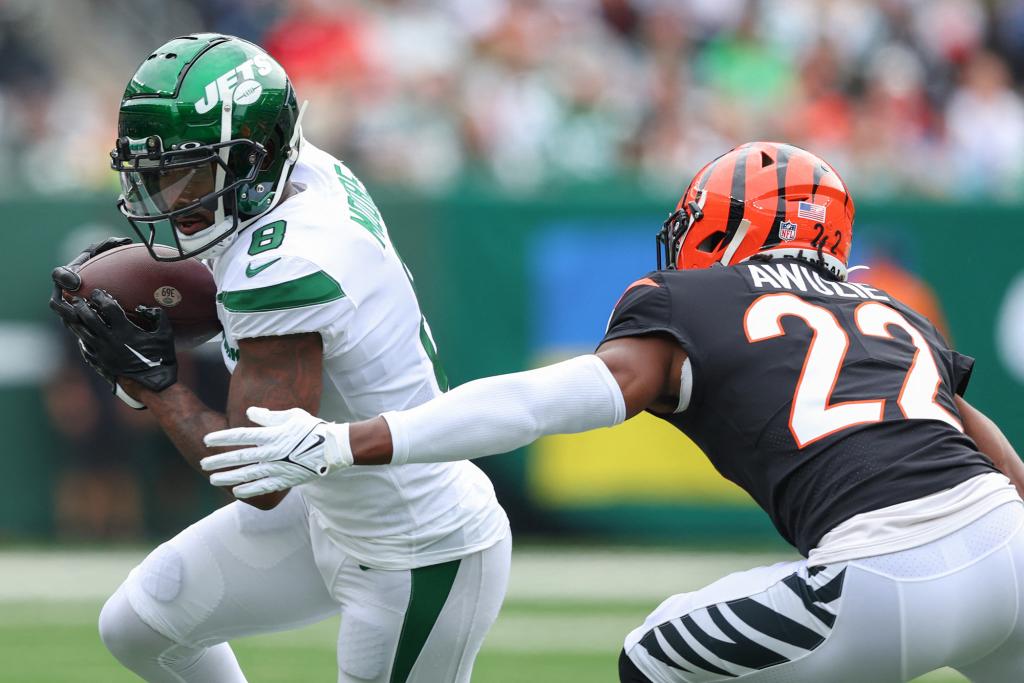 Jets wide receiver Elijah Moore went home to Florida during the bye week to spend time with family, and he returned with a smile on his face.

“I feel good. I got my spirit right,” Moore told The Post on Wednesday. “I reflected over everything. I had time with my family. I feel good. I feel rejuvenated.”

It has been a tough season for Moore, the second-year wide receiver. He saw his role diminish over the first two months of the season, culminating in him asking for a trade on Oct. 20 and the Jets making him inactive for their game in Denver. Moore returned against the Patriots a week later but has only been targeted once in the past two games and has not caught a pass since Oct. 9 against the Dolphins.

The Jets made a subtle shift in how they used Moore against the Bills, having him play mostly in the slot. Since Moore was drafted the second round in 2021, he has been used him primarily on the outside. But against Buffalo, Moore lined up in the slot on 19 of his 27 snaps, per Pro Football Focus.

The move was not just about Moore. The Jets slid rookie Garrett Wilson outside to the “X” position that Moore had been playing more in the previous two games. Wilson has exploded with two big games, combining for 14 catches for 207 yards. The Jets have also been without Corey Davis (knee) in those games, leading to more playing time for Denzel Mims.

The revamped roles for the receivers could be something that gives Moore the bigger role he craves.

“I still think Elijah will be good wherever he goes,” coach Robert Saleh said. “It’s a few things, there’s the emergence of Garrett on the outside also. Elijah, trying to get him some run on the inside where he can utilize his shiftiness and his separation and his route-running ability, so it’s a bunch of different things, and not that he’s going to be exclusive to just the slot. It’s just going to be more opportunities in the slot. So, he hasn’t, to be official with it and maybe, I know it’s been a big deal over the bye week, he’s not making an official move to the slot. It’s just a lot more opportunities in the slot. So, just trying to utilize him to put him in the best positions to be successful.”

When Saleh’s comments about playing in the slot were relayed to Moore, he smiled big.

“Hell yeah. I’m ready man,” Moore said. “I love hearing stuff like that. Moving to the slot, I feel like it’s going to be an adjustment as far as the playbook, but I’m super excited.”

It always has been a little curious why the team viewed Moore as more of an outside receiver. In his final season at Ole Miss, Moore played 77.9 percent of his snaps in the slot, per PFF. As a rookie, the Jets had Moore in the slot just 26 percent of the time.

Though Moore clearly got frustrated last month, he seems to have a more positive attitude entering the second half of the season.

“I want to put my best foot forward and just be super positive,” Moore said. “Whenever stuff like this happens and the situation I’m in, everyone’s watching you. There are more eyes. You want to make sure you set an example, because someone else will go through this someday, too. You want to be able to say you handled it well, and that’s all I wanted to do.”

Moore has 16 catches for 203 yards on 30 targets. He has yet to score a touchdown this season. Moore had zero targets in 27 snaps against the Bills, which seems hard to fathom. But Moore was excited in the postgame locker room and celebrating the win with his teammates.

“I was just happy we won,” Moore said. “Either way that game was super exciting, even if I was you know … I already know what my situation is. I’m trying to make it better every day. That was a moment that was bigger than me. We just beat the Bills.”