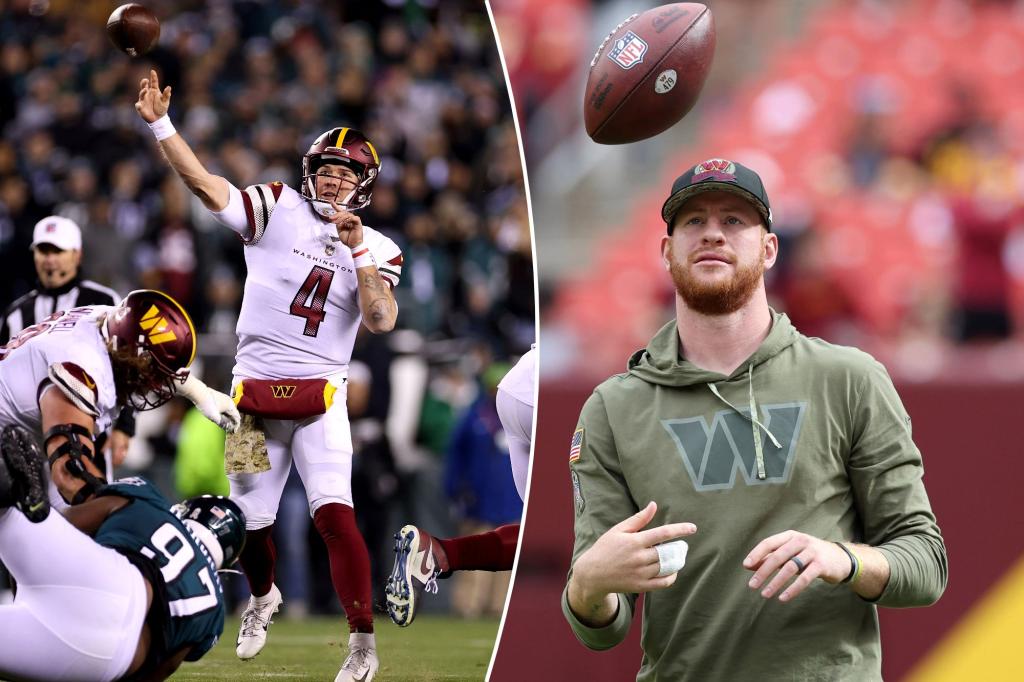 The Commanders coach said he has not made up his mind on who the team’s starting quarterback will be, with Carson Wentz nearly ready to return from a fractured finger on his right throwing hand.

“You look at what is best for the team and that’s how it has to be,” Rivera told reporters on Tuesday, a day after the team’s 32-21 upset of the previously undefeated Eagles. “There’s a great saying, ‘You treat everyone the same, you treat everyone fair but you treat everyone according to the team.’ So the decision will be made about the team first and foremost. Whoever the starter is I will commit to them fully. I don’t want them looking over their shoulder.”

Wentz — acquired in an offseason trade with the Colts — started the first six games of the season before suffering the injury in a 12-7 win over the Bears. That uninspiring victory brought the Commanders to 2-4.

Heinicke has led Washington to three wins in four games, topping the Packers and Colts before the Eagles shocker. Heinicke was shown on the team plane leaving Philadelphia dressed in chains that belonged to defensive players.

He lacks the arm strength and pedigree of Wentz, the No. 2 pick in the 2016 NFL Draft, but seems to have won his teammates over.

Rivera said he first has to check with trainers to see if Wentz, also 29, is healthy enough to play. Washington travels to Houston on Sunday to take on the one-win Texans as they try to inch closer to a playoff spot.

“I said it back in OTAs that we brought Carson in to be a starter. If my number is called, I’ll be ready to go in,” said Heinicke, who bounced around four NFL teams and then made a stop in the XFL before finding a home with the Commanders.

“Whatever decision they want to make, let’s go. If I’m backing up Carson next week, great. The biggest thing for me is let’s just go win. Let’s keep winning whether it means playing or not.”