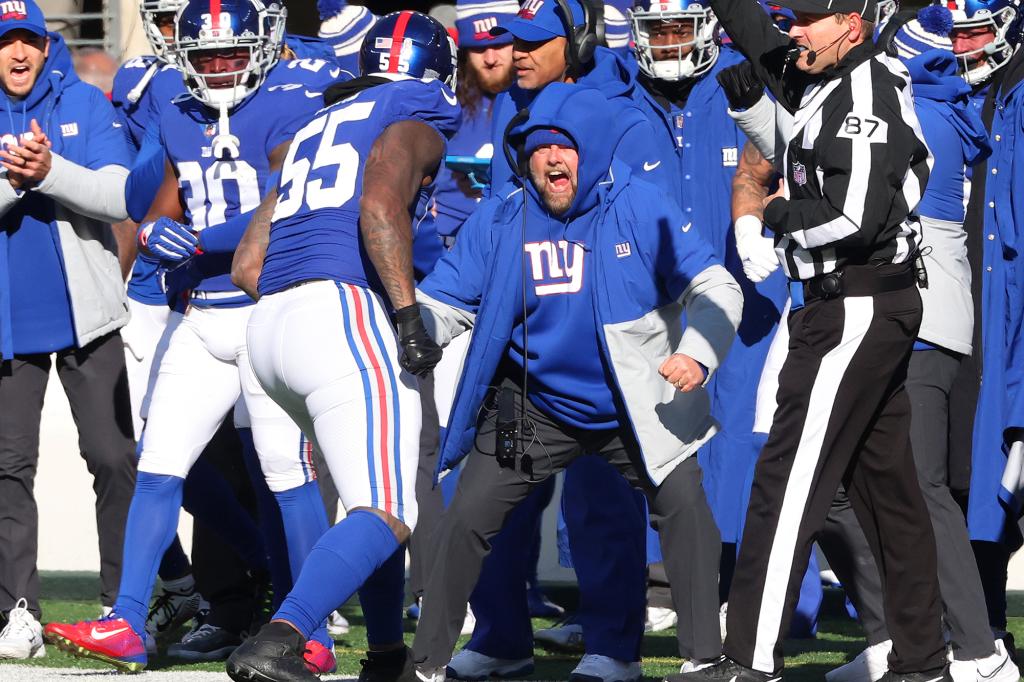 Well, at least the Giants got Kenny Golladay off the schneid.

That about sums up the best thing that can be said about the Giants’ day Sunday at MetLife Stadium, where they were dominated by the Lions 31-18.

Their maligned receiver, who wears that $72 million free-agent contract around his neck like a cinder-block necklace, eclipsed his 2022 production with two catches (his first receptions since the season opener) for 29 yards.

So, Golladay, who drew the loudest reaction from Giants fans on this desultory day — albeit Bronx cheers — got his.

As for the rest of the Giants?

For the first time this season, they stunk. Across the board — coaching, offense, defense special teams, everything.

After a pause, Daboll added, “Nothing was up to standard.’’

The Giants dropped to 7-3 and lost five starting players to injuries in the game. And now they face a quick turnaround with a difficult Thanksgiving road game against the 7-3 Cowboys in four days, possibly staring at a two-game losing streak and three losses in their past four games.

After the feel-good first nine games of this unexpected surprise of a season that was supposed to be a complete rebuild with a new regime, Daboll now faces his first mini-crisis.

His team on Sunday looked like the less-prepared, less-physical, less-hungry team against a team it was supposed to beat.

The Giants turned the ball over three times, leading to 17 Detroit points, committed eight penalties, several of which were game-turning killers. Their best offensive player, running back Saquon Barkley, was held to 22 yards on 15 carries by a Detroit defense that entered the game ranked 31st in the NFL in run defense.

“If you have three turnovers and the other team has zero,’’ Daboll said, “you’re probably going to lose every game.’’

Making matters worse for Daboll, the curious decision by him and his coaching staff to use starting cornerback Adoree’ Jackson, one of their most valuable defensive players, as the punt returner blew up in everyone’s faces Sunday when Jackson was lost for the next several weeks with a knee injury while making a 3-yard return early in the second quarter.

Daboll began having Jackson share punt-return duties with Richie James last week after James muffed two punt returns in Seattle. It was a bad idea at the time and Sunday only reinforced that.

“Look, it’s football’’ Daboll said. “Obviously, it was unfortunate. There’s a risk playing every player, regardless of what the position is.’’

That, though, was a risk simply not worth taking, because it’s not as if Jackson is some sort of Deion Sanders game-breaker. And consider this: The game-winning punt return for a TD by New England’s Marcus Jones at the end of the Jets game Sunday was the first punt return for a TD in the NFL this season.

The Jackson injury — because it came while he was returning a punt he should never have been fielding in the first place — represented an ugly stain on what was already an inexcusable, sloppy mess of a day for the Giants.

So, now we see how Daboll and his team respond to the first true adversity that’s rattled this feel-good, overachieving season that had people talking about them winning the NFC East and Daboll as Coach of the Year.

There is, of course, still time and possibility for those things to happen, but Sunday represented an alarming three hours of what Giants fans hope is not a glimpse at the final seven games of this season to come.

Daboll’s message to his players in the immediate aftermath of their worst performance of the season was all about moving on quickly.

“We’re all already anxious to get this taste out of our mouths and come back and play a much better football game,’’ said Daniel Jones, who threw two interceptions.

“We’ve got a quick turnaround, division opponent, learn from this game, put it behind us but all eyes are on Dallas,’’ Giants center Jon Feliciano said of Daboll’s postgame message. “We can’t dwell. If we dwell on this we lose to Dallas and we’re 7-4 and we can’t … we’ve got to get going.’’

Asked how much this game had “shaken’’ the Giants confidence, Barkley’s response came with some defiance in his voice: “Zero.’’

But the Giants, in their hearts, know better. They stunk.

The right answer on a day when everything went wrong.